﻿Transphobia is a Class Issue

[Content warning: In addition to transphobia in the abstract, this piece discusses harassment, violence and abuse. Some sources linked to for reference purposes feature transphobic abuse and slurs.]

Transphobia is a class issue. By this I mean that in a class society that is also deeply transphobic, it is impossible to talk about transphobia in a meaningful way without also talking about class. Trans people are more likely, all other things being equal, than our cis peers to fall into the most exploited and oppressed sections of the working class and the extent to which transphobia will negatively affect any given trans person’s life will be mediated by their economic class. This article is not intended to be a comprehensive analysis of every aspect of this issue, but to contribute to an ongoing conversation around it and illustrate a class struggle perspective on transgender issues.

These two types of transphobia are not strictly distinct and one often creates or reinforces the other.

Often when discussing transphobia popular discourse focuses on overt, interpersonal hostility and street level violent hate crime. While these are indeed real and very serious issues, this focus on the interpersonal and the overt often leads to a failure to recognise the measurable economic effects of transphobia on trans lives. This constitutes a form of hidden, endemic, systematic violence against working class trans people.

A 2015 EU report[1] found that trans people in the EU were more likely than their cis peers to be in the bottom 25% of earners and that around a third of trans people reported experiencing workplace discrimination in the year leading up to the survey and a similar proportion had experienced discrimination while looking for housing. Unsurprisingly, given high levels of workplace discrimination and general social stigma, trans people are disproportionately more likely to experience unemployment. Emma Rundall carried out a survey of trans people as part of her 2010 PhD thesis[2] and found that 14% of respondents were unemployed, around two and a half times the then national unemployment rate (pp 139 of thesis), this is consistent with a general trend in the literature for higher rates of unemployment amongst trans people.

Housing discrimination and high rates of family rejection and abuse also lead to higher rates of homelessness for LGBTQ people as a whole and particularly LGBTQ youth. A 2015 report by the Albert Kennedy Trust [3] found that LGBTQ youth were “grossly over-represented within youth homeless populations”, stating that one in four young homeless people were LGBTQ, the report also found that a majority of young LGBTQ homeless people reported rejection or abuse at home as a major factor in their homelessness, with an overwhelming majority of housing providers failing to recognise the unique and specific needs of this marginalised community for housing support. Specific figures for trans people alone in the UK are difficult to find, however in Canada, a culturally similar developed nation, the research and community organisation Trans Pulse carried out a study of health outcomes in 123 trans people aged 16-24[4], with a view to measuring the effect of parental support. All respondents reporting “strongly supportive” parents reported being adequately housed, however, almost half of the two thirds of respondents who did not have strongly supportive parents were “inadequately housed” (homeless or in a precarious housing situation), around one third of the total sample.

As well as the economic effects of transphobia itself, we can also consider the intersections of transphobia and class, i.e. the ways in which class and transphobia interact and magnify each others’ effects; the greater financial resilience of the middle and boss classes, the ability of wealthier trans people to buy their way out of some forms of transphobia, the classed nature of the bureaucracies that trans people are often forced to navigate and the elevation of privileged voices within the broader trans community as the authentic voices of all trans people.

A core component of transphobia at present is medical gatekeeping, the process by which trans people are forced to jump through semi-arbitrary hoops in order to access certain kinds of trans specific healthcare. In Sex Educations: Gendering and Regendering Women[5] Lisa Milbank discusses real life experience (RLE), a period of time in which trans people are expected to present “full time” as their gender in order to access certain kinds of healthcare, as a form of socially enforced “breaking” in which trans women are subjected to “an experience of public freakhood, composed of constant stares, transphobic harassment and potentially violence, without access to much of the (intensely double-edged) training given to cissexual women on how to survive this”, while Milbank focuses on the experience of transsexual women in particular, this also applies to some extent to the experience of other trans people. One’s ability to pass as cis (to be read by most people as a cis person of one’s appropriate gender) will heavily influence the extent to which RLE is a dangerous and potentially traumatic experience. Since passing as cis takes the form, in part, of being able to perform conventional cis norms, which are themselves heavily classed (and racialised), a trans person’s ability to do so will be mediated by their class status. I.e. the wealthier a person is, the more likely they are to be able to afford to take additional, elective steps (extensive hair removal, specialised clothing to hide or accentuate particular gendered body traits, etc.) to increase their chance of passing as cis. In this way, middle class and boss class trans people are more easily able to navigate gatekeeping in order to access healthcare and sidestep the harmful effects of RLE in a transphobic society. Similarly, since transphobia often takes the form of institutional and economic discrimination and/or family and community rejection, an individual trans person’s financial security becomes their ability to cope with isolation financially and to remove themselves from harmful situations (e.g. a neighbourhood in which they are frequently harassed or a family home in which they are rejected or abused) is key to their ability to survive and thrive in a transphobic society. While all trans people experience and are harmed by transphobia, the extent of that harm will inevitably be strongly classed.

To live as a trans person in today’s society is to frequently find ourselves bumping against the various bureaucracies that serve as its basis, from things as theoretically simple as changing one’s legal name to navigating the complaints procedures of government departments or companies in order to secure some kind of accountability for another instance of transphobia. While this is, in theory, something anybody can learn to do, these bureaucratic institutions are complex and exclusionary by design and often function to favour middle class people. In this way, yet again working class trans people suffer an additional burden from transphobia.

So given that trans people are disproportionately more likely to live in poverty and transphobia’s worst effects are experienced most by working class people, why is this not a part of the media discourse on trans people? Why are some of the most prominent media trans voices wealthy, right wing figures like Caitlyn Jenner? Part of this is precisely because transphobia is strongly classed; as discussed above the wealthiest people will find it easiest to “pass” and meet the standards of conformity to cis-heteronormative standards expected of professional voices in the media. Equally it is the case that middle class and rich trans people are simply more likely to have the necessary connections to be a major media presence. Where it includes trans voices at all, mainstream discourse on trans issues is dominated by an unrepresentative minority of wealthy, white, middle class, trans women. It would be remiss of me not to note an obvious irony here since, while I am far from wealthy and never have been, as a white postgrad student I am myself far from representative of the majority of trans people and, in my defence, I do not claim to be.

A common means of dismissing trans people’s attempts to raise issues that affect us or criticise institutions or public figures that have harmed us as a group is to dismiss us as privileged. Trans people are a bunch of middle class kids or a load of wealthy university students who are just looking for something to complain about. For example, after the well-established journalist Suzanne Moore went on a bizarre, transphobic tirade on Twitter[6] in response to criticism over the wording in one of her articles, fellow career journalist Julie Burchill wrote a piece, initially published in the Observer but eventually withdrawn and then republished by Spiked[7], which while largely consisting of a series of transphobic slurs also perfectly illustrated this ideological tendency. After claiming that she and other transphobic journalists are “part of the tiny minority of women of working-class origin to make it in what used to be called Fleet Street”, Burchill goes on to depict trans people as academics with “big swinging PhDs”, attempting to silence working class cis women by arguing about “semantics” (the semantics in this case being Moore’s use of “Brazilian transsexuals”, a group plagued by particularly high levels of poverty and violence[8], as a throwaway pejorative). While trans academics certainly exist, we are far from the majority of trans people or even trans activists, nor are we necessarily as highly privileged as Burchill would like to suggest. By engaging in this erasure of working class trans people, transphobes are able to both trivialise the serious, material effects of transphobia as discussed above and rhetorically exclude trans people from the working class.

In her excellent 2008 essay ‘Liberal Multiculturalism is the Hegemony – Its an Empirical Fact’ – A response to Slavoj Žižek[9], Sara Ahmed points out that racism is often projected onto the white working class, with liberal prohibitions on overt bigotry serving merely as a means to locate bigotry in some marginalised other. We see a similar process with transphobia, bigotry against trans people is positioned as definitively working class, and thus the existence of working class trans people can be ignored as impossible by definition. A well paid Observer journalist can mock trans people en masse as middle class kids, obsessed with identity politics, because everybody knows that real working class people are white, cishet and hostile to anybody who is not white or cishet. The reality, of course, is that this image of an “ordinary” working class as the default is a fantasy, the working class is a weird, wonderful and diverse class and only a politics that recognises the many and varied ways in which we experience exploitation and oppression can allow us to build a movement to end oppression, end exploitation and ultimately abolish class itself. ■ 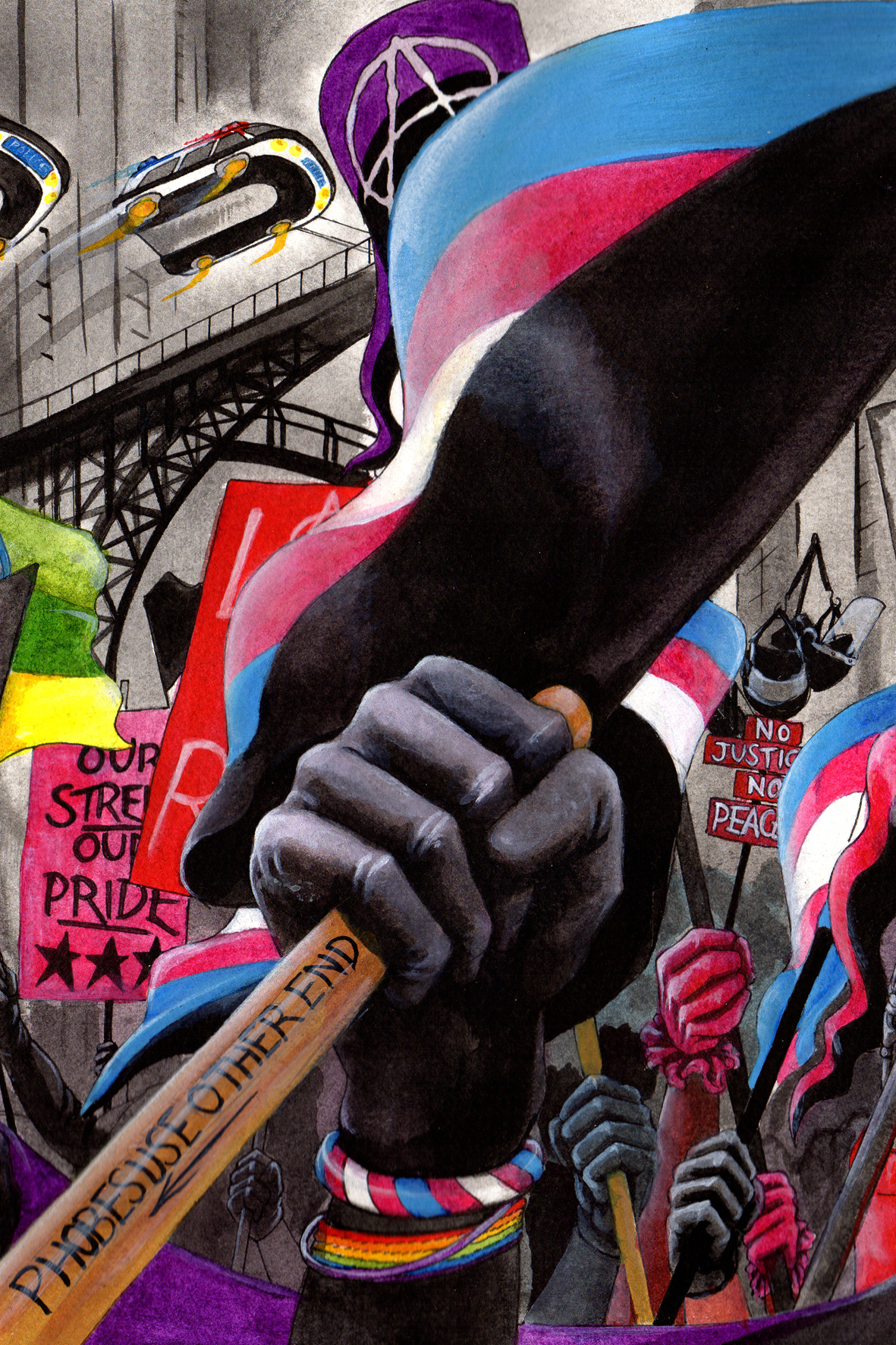