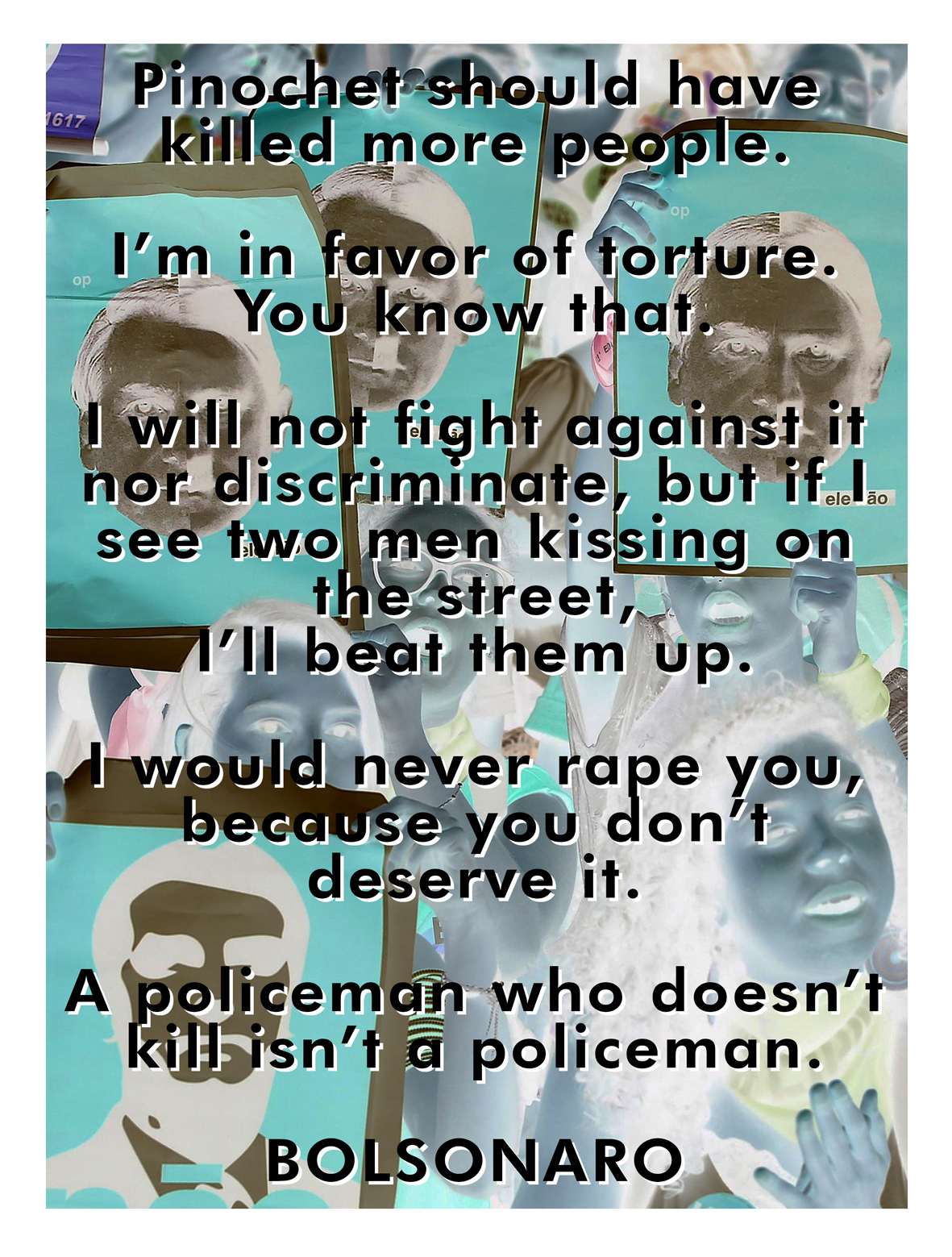 With the radically polarised process of Brazil’s presidential elections and the victory of an openly neo-fascist candidate, an important concept emerges that needs to be better understood within the Brazilian and international activist community: The Anti-Workers’ Party (PT) rage.

The formation of the PT and the New Republic

To better understand this subject, it is important to return to the first half of the 1980s, when Brazil was reaching the end of the military dictatorship period and going through the process of re-democratization. This period is known as the “New Republic” period. The end of the dictatorship in Brazil occurred in a scenario of economic crisis and at the same time of the collapse of various dictatorships in Latin America. In Brazil, this decline was accelerated by a great rise in social movements despite their repression in the dictatorship. One of the most prominent social groups was composed by the metallurgic workers known as “the metallurgical belt of the ABC” (metropolitan region of São Paulo). Numerous strikes and protests led by the group spread through the most diverse social sectors of the country, overcoming the power of repression by the police and the barrier imposed by media censorship. Other groups followed: from landless peasants to students, as well as the progressive wing of the Catholic Church, intellectuals and artists, community movements and workers from the most diverse categories.

The political impact of this struggle was enormous, boosting a historical reorganization of social movements in Brazil. Workers from various factories and categories rejected the rotten union structures (usually linked to the dictatorship) and created new unions such as the CUT (free translation: Central of Workers). From this shift of power and reorganisation of the unions, came the idea of ​​creating a new political party. An independent party from the bourgeoisie, and that unified the diverse social and popular struggles that the country was going through. The Workers’ Party (PT) was therefore created under the leadership of Lula da Silva, a metallurgist from the Northeast of the country, who was at the forefront of the social movements and became a political prisoner multiple times during the military dictatorship.

Throughout the 1980s, the PT was consolidating itself as the main leftist party of the New Republic. Its strategy was to get to power via the democratic electoral route. In the first elections in the country after the military dictatorship ended, in 1987, Lula reached the second round of the process, being defeated by Fernando Collor. Collor would undergo Impeachment two years later due to a corruption scandal. Lula later ran again and lost to Fernando Henrique Cardoso the 1994 and 1998 elections. With the impact of the economic crisis of the late 1990s and early 00s, Lula was finally elected president in October 2002.

The 13 years of PT governments

During the 1990s, PT was already beginning to gain space in the political scenario winning various local and national elections. In many cases, the elected representatives put in practice the social welfare policies and the democratic participation of the population in decision making, such as the participatory budget currently used in several countries. They also launched changes in public healthcare such as the unified system of ambulances (SAMU), inspired by the model used in France, launching in Porto Alegre first and expanding nationwide after 2003.

However, months before the election that led Lula to the presidency, PT released a document entitled “Letter to Brazilians”. In this document, PT committed itself not to alter the pillars of the economic agenda that had been applied by the previous conservative governments (for example, from the party PSDB), calming down the fears that leading economic groups could still have regarding an eventual PT government.

Now in government, PT continued to broadly apply the social-democratic agenda but with some adjustments. During Lula’s second administration, the world commodities market experienced an unusual boom. The Brazilian economy, strongly based on this type of product (oil, gas, minerals, etc.), had grown significantly. The PT government took advantage of the economic growth and increased investments in social policies. The measures did not change the country’s economic structure but allowed the social inclusion of millions of families who were living below the poverty line. It gave access to consumption and goods that a large part of the population had never dreamed of. Sectors of the middle class consequently began to develop an Anti-Workers’ Party rage based on the traditionally retrograde mentality shared by this social class. They struggled to tolerate “poor people in airports and universities”, both seen as privileges reserved to the few. But this new economic scenario of the country went from strength to strength, which left the middle class feeling politically marginalized. Yet the “Cansei” (I’m fed up) marches, a movement of the upper-middle class of São Paulo, typically dressed in green and yellow and protesting against Lula’s presidency, did not reach 100 attendees.

The economic crisis and June 2013

However, the economic growth reached an end. The great global economic crisis of 2007 changed the landscape in Brazil. The commodities market, especially oil, gradually returned to pre-growth levels. Dilma Rousseff, Lula’s successor, was then in charge of the government. Lula had already served two consecutive terms – the maximum allowed by Brazilian law.

The population was beginning to feel the decline in living standards and to realise that the government was failing to maintain the same economic growth from previous years. There was a feeling that the bill was being paid by the population. The mega-events planned for the country (World Cup and Olympic Games), turned from a source of pride to an example of waste of public funds. All that while the basic needs of the population were not being met. In June of 2013, a student mass protest against the increase of the bus fares in São Paulo was harshly repressed by the Military Police. However, it quickly gained momentum and spread throughout the country. It was the beginning of the so-called “Jornadas de Junho” (Journeys of June), the greatest social mobilization in Brazil’s history: tens of millions of people took the streets demanding further social changes. The protests were very diverse and composed by people from all parts of the political spectrum. In general, the protests of June had in common a progressive agenda. However, the far-right took advantage of the political moment and infiltrated in the process instigating the Anti-Workers’ Party rage, blaming the left for all the social discontent and lack of perspective for a better future.

The 2014 Elections and the Impeachment of Dilma Rousseff

In the 2014 electoral process, Dilma reached the second round against the PSDB candidate in a fiercely contested election. Large part of the upper middle class had adhered to the Anti-Workers’ Party rage. In the second round, PT adopted an anti-austerity speech, more to the left, and reversed the rejection to its policies. At the end of the elections, Dilma adopted a very different agenda from what had been defended in her campaign up to that point, disappointing many of her supporters.

The bourgeoisie, on the other hand, wanted an even stronger pace of fiscal adjustment. It encouraged and radicalised the Anti-Workers’ Party rage, giving support to Dilma Rousseff’s impeachment.

In the current elections, with the failure of the traditional conservative parties (such as PSDB), the space was occupied by a neo-fascist alternative: Jair Bolsonaro. To enable his rise, the campaign supported by the international fake News industry (with the participation of Stephen Bannon, former Trump aide) and hate speech. Quickly the campaign took surreal proportions. The far-right took advantage of the desperation and lack of perspective of large sectors of the population to inflame hatred against their “enemy within”: the black, the poor, the women and the LGBTQ. And the left activists fighting the rise of extremism were all labelled as “PT supporters.” The far-right encourages an unhealthy Anti-Workers’ Party rage to facilitate its policy of brutal repression to the social movements, finally making it possible to consolidate their political project.

In this delicate political moment, we understand that the role of the left is to fight the reactionary and neo-fascist president. It does not mean embracing PT with its past mistakes and current limitations. It does not even mean supporting a possible new government from this party. The PT’s alliances, manifesto and recent practices show that the party has not yet realised the need to reinvent itself from within – as for example the UK Labour Party has. It is necessary to overcome the limitations of PT in the future, but today the priority is to fight the neo-fascism.

The  far-right in Brazil used the Anti-Workers’ Party rage as an ideological basis for its strength. Brazil has elected a neo-fascist government. Parallel to that, social movements gain strength and resist, the left reorganizes itself.

A movement of more than 4 million people and led by women stood up to this political threat without defending PT and its alliances. The #EleNao campaign fought the rise of fascism.

No matter what the Bolsonaro government will be, the work of building a new political scenario that goes beyond the polarisation focused on very few parties continues and the task of defending basic democratic rights will be the order of the day. The #EleNao campaign has already shown the way.

We have a long road ahead of us, and we have confidence and willingness to keep fighting.■