Last Thursday, the day after major Mayday demonstrations, a comrade from the Fédération Anarchiste was attacked in the FA's Parisian infoshop and bookstore Publico by a man in his mid 40's with a knife. The attacker came at Christophe with a knife while he was packing books and hit him so violently that part of the blade broke off in his skull.

Shortly after the attack they were called and given verbal abuse down the phone, removing the possibility of a simple random event. No, this was a cold attempt at murder almost certainly given the history and context, by someone aligned with the far right.

Publico, where Christophe volunteers his time is a central hub for the Anarchist scene in Paris, much like Freedom in London, it plays host to several groups such as Radio Libertaire and the paper Le Monde Libertaire while providing a warm and welcoming space for those looking to pick up books about Anarchism and related struggles. It is no stranger to assault, "We have already had incursions of right-wing activists in the bookstore, who entered shouting things like “France to the French” but never a savage attack" laments a volunteer and indeed it's a deeply concerning escalation of the violence as more and more Anarchist and Socialist spaces come under attack. Last year we saw far right storming into Bookmarks and the previous year saw the "Pie and Mash" fascist troop attack the ANAL social centre in Belgravia force them and the crew and homeless guests to defend themselves. Elsewhere the Proud Boys attack on the Portland IWW Union Hall it's very easy to become concerned about things escalating to the tragedy that befell Libertatia in Thessaloniki when Fascists attacked the social centre, burning it down in the process.

Christophe was taken to Saint Antoine the hospital where he was treated however scans show that a fragment of the blade has remained planted in the skull bone. Thankfully Christophe's health seems stable and he was patched up and sent home to recover while waiting for an operation to the remove the left over shard. At time of publishing the culprit remains unknown no doubt quite proud of his addition to the air of oppression and constant threat of violence that fascist skum aim to seed with their horrific acts... However, the main concern to Publico's opening hours remains the ongoing renovation work. The revolution will not be intimidated, it will not be silenced and we will not allow these acts of violence to pass.

Anarchist and Socialist spaces are bastions of liberty and community in an overtly oppressive environment and they must be defended. The threat isn't just from the xenophobes on the far right but from the state as well with even such large communities as ADM in Amsterdam being evicted by legal and physical force. We must remain vigilant and with all our must protect and preserve these spaces for the benefit of the communities they serve and improve with their existence

Our complete and overt solidarity with Christophe, Librairie Publico and the Fédération Anarchiste during these most interesting times on the streets of Paris. 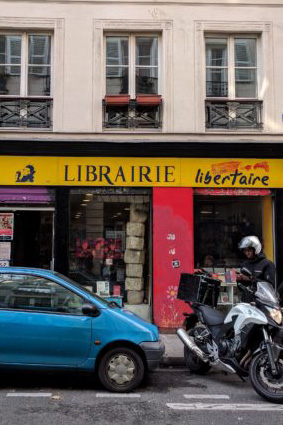