Anarchism and the Student Movement in Yacuiba

The student movement in the south of Bolivia has a long history, as well as diverse ideological influences. Denying the existence of a student movement in the domain of public universities, especially with the ideological influences of the symbol that it was, affirms that apoliticity on the issue of education is a contradiction; as Paulo Freire says: “The political nature of such a task exists independently of whether we are aware of it or not." (p 137, Letters to Guinea Bissau, Freire). If indeed secondary school and university students or teachers, all students, were walking in the Chaco Plain without meeting one another, this wouldn’t mean that their paths would never cross, such as in May 2001, when the “Guevarista”-influenced current in the classrooms of the Universidad Pública en Yacuiba (Public University of Yacuiba) decided to meet with the leadership of the secondary student movement at the centre of the Student Coordinator popularly known as Asoces (Asociación de Centro de Estudiantes – Central Association of Students). For the last three years of the twentieth century this became a space in the south of Bolivia to criticise the policies of the neoliberal Educaional Reform Bill of 1994. Continuing this legacy, in the first decade of the twenty-first century came the revival of the Federación Estudiantil Secundarista (Federation of Secondary Students), but it was then (May 2001) that university and secondary students in Yaciuba really understood the necessity of pushing for the consolidation of higher education in Chaco. We mustn’t forget that in 2001, the University of Tarija wanted to close the only option for public higher education in Yacuiba.

That attempt, which would have succeeded because the fight didn’t resonate with the public (the local bourgeoisie showed no interest in supporting the consolidation of public higher education in Chaco), would still find an opposition in the students who organised in the Asoces, in an agreement with the union which would later repeat itself at other levels of decision. A quote from Bakunin says, “The union is strength. This is a well-known truth that no one will want to contradict. However, it is important to understand it well. For the union to produce that effect, it must be real and sincere at all times and not mean the hypocritical exploitation of one party for the benefit of another.” (Letter, Bakunin, 1870) It is important to note that the majority of the militants of the Asoces had an inclination towards anarchism, belonging to a group descended from the thought of Liber Forti. This anarchist intellectual played an important role for the constitution of the Universidad Obrera de Llallagua (Workers University of Llallagua), having contributed to the formation of a nucleus of militant anarchists during his visits to the city border of Yacuiba in the second half of the twentieth century. Towards the end of that century, these anarchists would pass their knowledge to a new generation, who would discover a revolutionary truth in the writings of Pierre-Joseph Proudhon, Errico Malatesta, Mikhail Bakunin and Piotr Kropotkin. Without that knowledge, the anarchist student movement in Yacuiba would not have been able to construct a solid discourse of struggle and unity.

On the subject of the union, Bakunin states: “Trust makes the union, and the union creates strength. We have here, without doubt, two truths that no one will try to deny. Moreover, to be true, two things are necessary: that the trust is not a farce and that the union, equally sincere for all parties, must not be an illusion, a lie, or the hypocritical exploitation of one party by the other. The parties who unite must forget completely, not forever, no doubt, but for the time that the union should last, their particular, necessarily opposed interests.” (The Knouto-germanic Empire and Social Revolution, Bakunin, 1870). The economic crisis of the capitalist system which hit the people of Yacuiba in 2002, the consolidation of the secondary student movement in 2003, the consensus of the Encuentro Nacional Libertario (Libertarian National Conference) in Paukaparta (La Paz, 16 October 2004) and the expansion of public higher education in Chaco from 2002, would set the stage for the signing of the founding statement of the Frente Autonomia (Autonomous Front), a student organisation which with time pushed for the creation in 2007 of their own Federación Universitaria Local (Local University Student Federation) [FUL] for Chaco (since 2018 this instance of co-government is no longer classified in a separate list in the directory of the regional FUL, thus burying ten years of an experience of government which respects the particular characteristics of university life in Yacuiba). Since the student elections in 2008, Autonomía has been growing as an anarchist student organisation, on the platform of “a strong student movement, built from the bottom up” (Documento Político para Transformar la Educación superior Pública, Autonomía, 2014). It mobilised students in defence of their rights in various Student Government leadership spaces in the Faculty of Integrated Sciences of Gran Chaco, part of the University of Tarija. By March 2018, it would reach the historical milestone of being the driving force of a university movement at the departmental level, challenging the ruling cliques of the most neoliberal universities of the Bolivian higher education system. The passage of time has allowed for the consolidation of a Yacuiban anarchist group into a model of organisation, direction and unity for the rest of the Bolivian student movement.

Since 2018, Autonomía has been the fundamental pillar in building the Federación Estudiantil Boliviana Anarquista [FEBA], a diverse space for discussion between the popular and anarchist student organisations, which fight the hierarchy and corruption of the leadership of the Student Governments, in addition to the opportunistic electoralism of short-lived groups which, stripped of all ideology, seek only the crumbs of power for their own benefit, forgetting the large majority of students who are victims of authoritarian teachers and the despotism of the university authorities. “It is the students who are the victims of the worst learning conditions, due to the ruling cliques of teachers who silence all protest and the cowardly student representatives who don’t speak up against them,” (Declaración por el día del trabajo, Autonomía, 2019). With this philosophy, affiliated to the FEBA and adhering to the associative pact of the IFA, the Autonomía Frente Universitario is the only student organisation which is currently continuing to defend public higher education in Yacuiba, true to its history and commitment to transform education into an instrument of liberation and social justice. 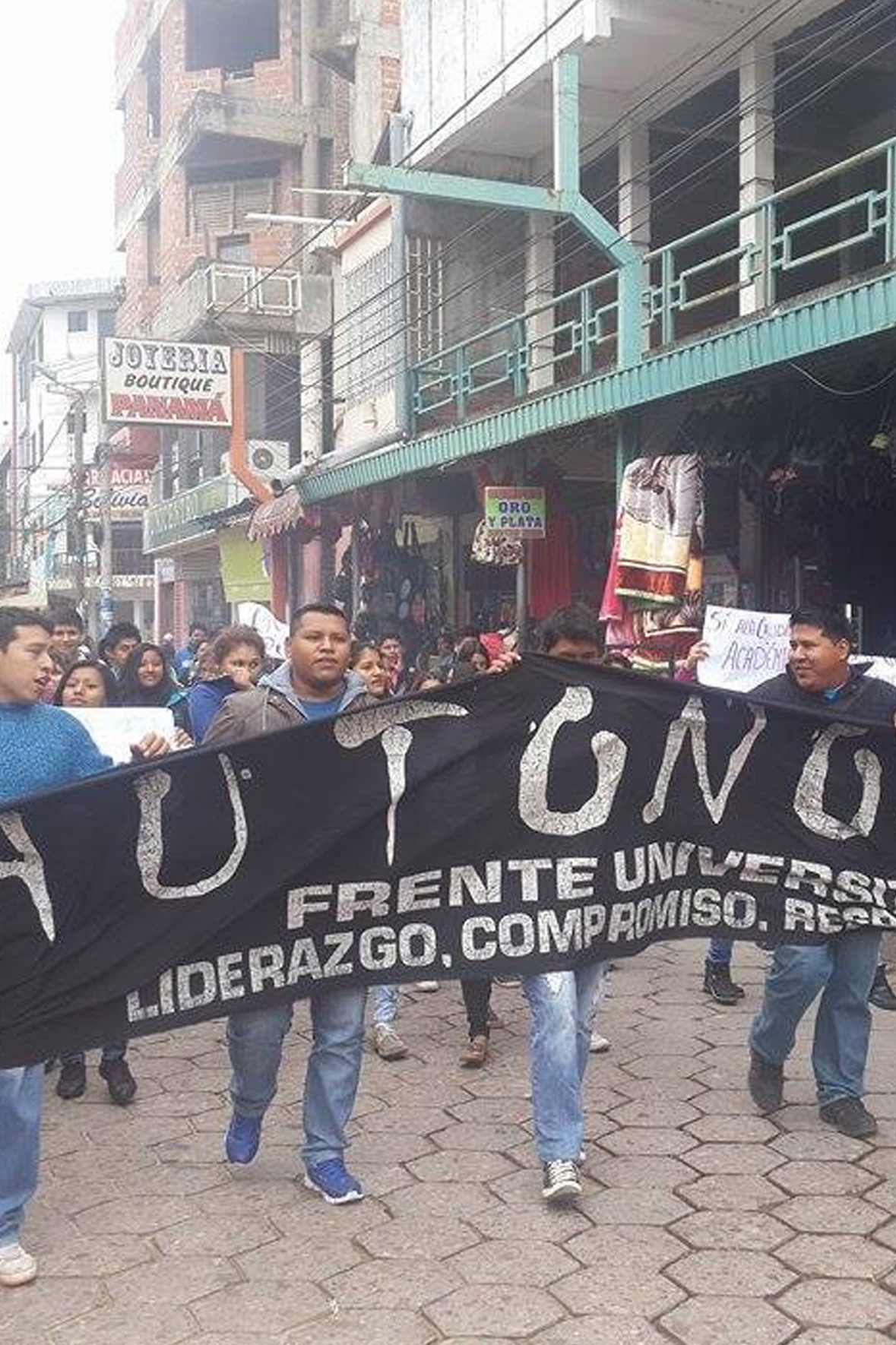