Why We Fight The TERF War | Theory And Analysis

This article is a call to action to protect and defend the trans community.

There is no space for neutrality.

We strongly suggest you listen to G.L.O.S.S. when reading this article.

[This article is lifted directly from the original zine format which you can download below.]

Many TERFs will claim they believe in trans rights and that trans people should be protected from violence. However, they incorrectly believe that people's biology (e.g. genitals and chromosomes) determine their gender and whether they experience sexism and gender -based violence. Their ideology results in them refusing to accept trans women as women and discriminating against them by excluding them from spaces cis women can go to.

Anyone who supports or promotes these ideas – whether it’s attending events in person, sharing online, or any number of other questionable methods – is, in our view, a TERF.

TERMS
Transphobia: hatred of trans people (although in this zine we try to use more precise words e.g. trans hostile, or trans derogatory).
Trans misogyny: form of sexism aimed particularly at trans women and trans feminine people.
Dead naming :referring to someone by a former name they no longer use.
Mis-gendering: using the wrong pronouns.
Cis: people who aren’t trans/ are assigned the appropriate gender at birth.

MEET THE TERFS
TERFs come in many shapes and sizes. Here are a few groups on the scene at the moment.

Transgender Trend
They Say: “We are a group of parents based in the UK, who are concerned about the current trend to diagnose “gender non-conforming children” as transgender.”
But: Encourage parents to disbelieve and dismiss their trans children's identities; intensifying gender dysphoria.

Feminist Current
They Say: “We provide a unique perspective on male violence against women”
But: Intentionally mis-gender and dead name trans women and deny the existence of trans people.

We Need To Talk About Sex
They Say: “We discuss the Gender Recognition Act and its impact on the rights of women and children”
But: Target and harass trans women, deny that trans women are women and, mis-gender and dead trans women on purpose.

Mayday for Women
They Say: “Mayday are a collective of women who have come together to: Oppose the proposed changes to the Gender Recognition Act 2004, Stand up for women's rights and defend women's freedom of speech”
But: Campaign against self-identification from trans people, promote ideas that being transgender is idealogical brainwashing and intentionally mis-gender trans women.

Fair Play for Women and Girls
They Say: “We are a group of ordinary women who are concerned that in the rush to reform transgender laws that women's voices will not be listed to”
But: Promote lies about the trans community, campaign for trans women to go to male prisons and erase trans identities.

Lesbian Rights Alliance
They Say: “[We] defend lesbian rights to have same sex relationships and defend lesbian and women only space and stop the erasure of lesbians”
But: Intentionally mis-gender trans women, promote ideas that trans men are “sick”, and blame trans people for the oppression of lesbians.

THE DANGER OF TERFS
TERFs may be a fringe group, but they tap into the trans-hostile and trans misogynistic views held by many, across the political spectrum. They are not the first hate group to hide under the guise of left wing struggle. We’ve seen it with right wing nationalists and racists working their way into the animal rights movement. Like Gays Against Sharia, TERFs weaponize victim status to demonize and encourage hatred. These are not views that can be “discussed” or “debated”. They even attend anarchist events to campaign for more repressive state laws (can anybody see the irony there?)

They rely on a mixture of clever wording and a hope that the majority don't really understand what they are talking about. They are hiding under a thin disguise what is nothing more than hate speech. They aim to isolate and exclude trans people. They erase trans identities and fuel already high levels of violence against trans women.

This violence is predominantly targeted at trans women from working class backgrounds because TERFs campaign to exclude trans women from women's prisons and refuges which disproportionately affects trans women on the bread line. We all know prisons aren't full of rich people, and the rich rarely find themselves without a roof over their head. And given the institutional racism that both lands disproportionate numbers of people of colour in prison and excludes them from accessing services, it’s safe to assume that trans women of colour are particularly affected by the words and actions of TERFs.

DEALING WITH TERFS
We must no platform and resist TERFs. This can be done in many ways, such as:

Organize demos when TERFs arrange to speak: sometimes their events are held in secret, and it may be necessary to buy a ticket. There are pros and cons to this; but if you decide to, use a fake name and email. Remember to cover your face at demos like this – TERFs will try to film you and then target you. Try to get Legal Observers on hand too, for when the pesky cops show up.

Proactive myth busting: hold events, talk to people, share stuff written by trans writers on social media, or whatever works for you!

Calling Out TERFs: when you hear TERFy stuff, or see it on social media. If people won’t engage, exclude them from your groups.

Support Trans prisoners: show solidarity with trans people incarcerated by the state by writing to people inside (check out Bent Bars project) or raising money to support their legal cases and other needs (Empty Cages Collective can give you pointers there).

It is most important to offer one another support as we organize. TERFs try to pick out individuals, they try to isolate us from one another. But this will not succeed if we prioritize caring for one another.

SHALL WE TALK ABOUT VIOLENCE?
When talking about this situation, we feel it is crucial to consider the levels of violence and oppression the TERFs are campaigning to be inflicted by the state and other elements of society on trans women.

They are campaigning for a world where trans women are refused appropriate refuge from abusive partners and dangerous situations, knowing full well the disproportionate levels of violence aimed at trans women. They seek to maintain a system in which women are sent to male prisons -a place we have lost far too many trans sisters in thelast 2 years alone. And this is just what they are openly campaigning for, without mentioning the obvious trans-hostile undertones and side agendas that they are less public about.

When opposing TERFs, protestors have experienced intense levels of trans-derogatory verbal abuse and physical violence. Whilst we are in no way telling people they should be violent, nor that it is the only effective tactic, we think it would be counter-productive and insensitive to condemn violence used in the fight against trans-hate given the real life dangers trans people face. For some this is an ideological, philosophical or academic fight but for people like us it’s a fight to exist -so don't be so quick to judge the methods used by some of our allies and comrades.

MYTH BUSTING
“But SCIENCE!!!!” TERFs say that chromosomes are an absolute indicator of gender and that science thus “proves” that trans people can’t exist. BUT the reality of biology is much more complicated, “Biologists have never been under the illusion that genes and chromosomes are all there is to the biology of sex.” (Sarah Richardson, Sex Itself)

“Trans as a new/ modern idea.”TERFs claim that being trans was “invented” in the early 20thcentury by a patriarchal medical system. BUT in fact trans people have been known in many different cultures around the world and throughout history.

“Trans women are socialized as men.”TERFs say trans women are raised as male making them violent, patriarchal aggressors BUT many undergo social transition as young as 5, and/or have lived as women longer than they have as men. Even those who do come out later don’t experience growing up in the same way as cis men and are usually more critical of the way they were raised.

“You’ll grow out of it/regret it.” Saying these sorts of things does not have the effect of saving people from surgery, it just delays or even stops trans people from accessing the services they need. Whats more, there are many different ways of being trans not all of which involve the same amount of surgery, or necessarily any surgery at all. (SPOILER ALERT: if you’re ever tempted to ask a trans person whether they’ve thought about this –YES THEY HAVE).

“Changing the gender recognition act will harm cis women.”TERFs have been rallying around the claim that changes to the Gender Recognition Act will put women at risk as it will allow men to enter women-only spaces. This is false. Several countries, including Ireland, Norway and Denmark, have already passed laws to allow trans people to determine their own legal gender with great success.

In any case, trans women are already using women’s toilets in the UK. They are also already accessing services via women’s refuges. This is because the Equalities Act 2010 recognises “gender reassignment”as a protected characteristic, and protects against trans people from being discriminated against when using facilities appropriate to their gender identity. Changes to the Gender Recognition Act will make no difference. ■

This zine/article was written by Sister Not Cister UK, An organisation who are angry with the recent rise of anti-trans feminism and organise workshops and media to help educate people on the issues around transphobia.

You can download the zine in print format below:- 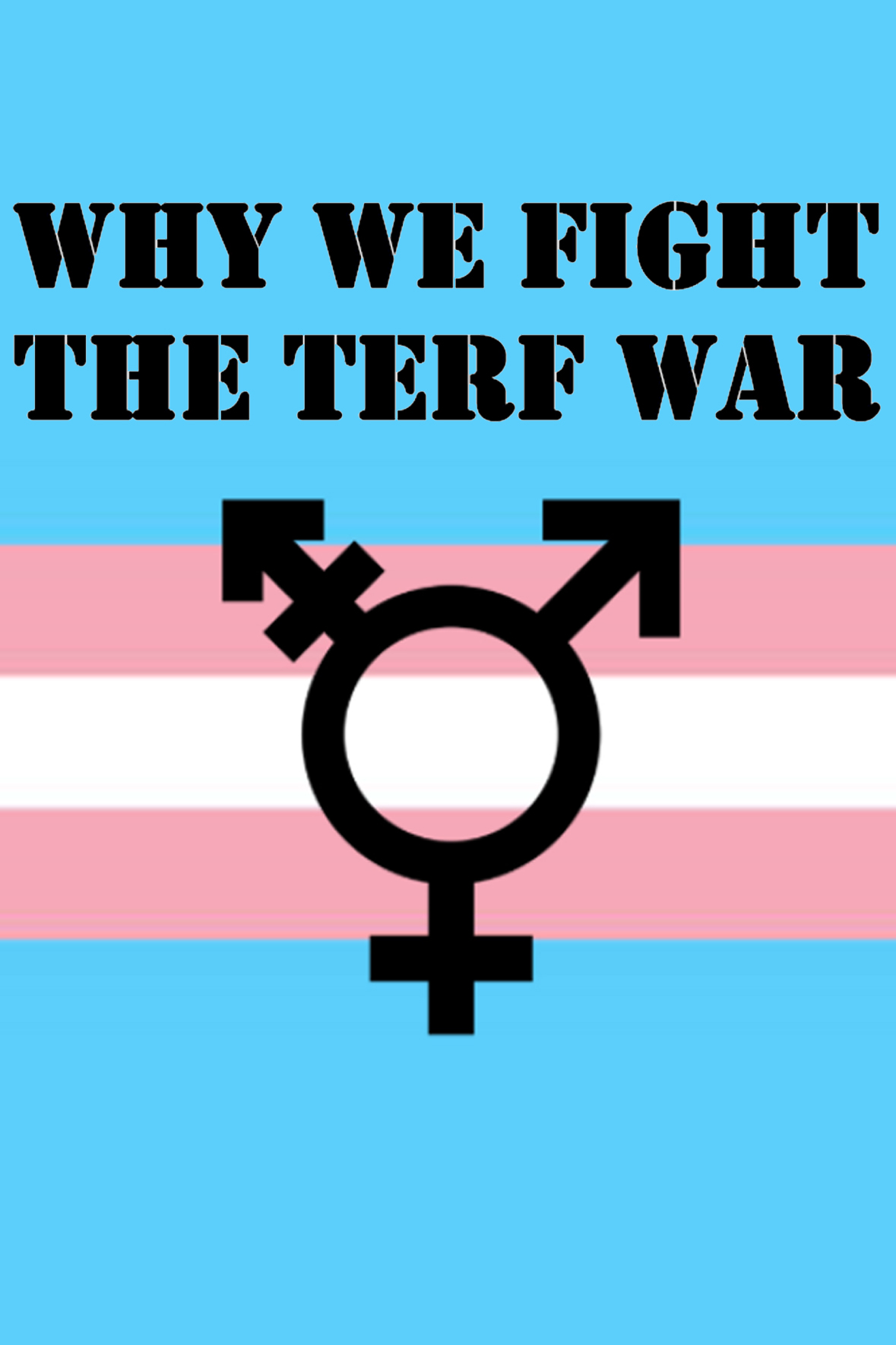