The 11th Congress of the IFA | International

The end of last month saw the 11th Congress of the International of Anarchist Federations, which co-ordinates social anarchist organisations across 13 different national and language regions in three continents — we reproduce (via Freedom) reports from the gathering below.

Background to the IFA Congress
The following is adapted from an article which first appeared in Italian anarchist newspaper Umanita Nova.
Prior to the 2019 Congress in Ljubljana, Slovenia the last major gathering of the IFA was in Frankfurt, Germany, in 2016. That gathering supported the creation of the Central American and Caribbean Anarchist Federation (FACC), as well as offering solidarity for a renewed will being shown to coordinate anarchist organisations in Latin America, the revolutionary process underway in Rojava, the founding of Greece’s Anarchist Political Organisation (APO), and many social mobilisations from French upheavals to the TAV struggle.

Since that congress the IFA has maintained strong relations between the many anarchist realities that compose it, supporting the struggles and experimentations that member federations live daily, from Brazil to France. It has promoted campaigns such as that denouncing the murder of Santiago Maldonado in Argentina and in support of the Mapuche population’s struggle, against the oppressive regime of Maduro in Venezuela and in support of the anarchist components that are an important part of the ongoing revolutionary process in Rojava.

The Ljubljana event was an opportunity to move the Frankfurt discussions forward and examine what has been done since 2016, to support the creation of renewed federative processes such as those undertaken in Brazil and to give sister organisations like APO the opportunity to join the IFA. But it was also an opportunity to meet and discuss, to discuss the socio-economic processes that groups and federations are living on their territories, working through strategies to deconstruct the neo-liberal imagination that still pervades the actions of billions of people around the world and crushes and influences masses of exploited and exploited.

Core topics identified ahead of the gathering as they are seen to affect anarchism today included:

It is an important moment for organised anarchism to strongly reaffirm libertarian and class internationalism, and commit to cooperation and solidarity between the exploited — to strengthen struggles and experiences that can break down borders, walls, homelands and encourage the construction of a free and equal world.

Diary of an International

Venezuelan media group El Libertario was present as an observer to the IFA Congress and produced a daily diary of events, which we reproduce an edited translation of below.

July 24th
This first day was mainly designated for the traditional reception and presentation of the different participating federations, as well as to presentations by invited guests of the international. Federations present were:

In the evening hours, the Argentine comrades offered an excellent video forum (open to the general public) on gender struggles in Argentina, including the struggle to legalise abortion and improve women’s rights already showing an attendant process of protest and struggles for the rights of transgender people … The questions were swift, showing the great interest and curiosity aroused by gender issues on our side of the world.

July 25th
On the second day of the congress we had the opportunity to attend a debate on Migration and Borders, a discussion that began with delegates from across the Iberian Anarchist Federation recounting the general conditions of the migration process in southern Spain and between countries in Europe. Delegations from the Italian Anarchist Federation also talked on what is happening under their hard right government, and its positions on this issue.

Brazil’s Comrades were also given the opportunity to present on problems arising with the far-right Bolsonaro government, where the State is stimulating indifference and sharpening the repression of internal migratory movements in Brazil. Argentine comrades meanwhile spoke on how Latin American internal immigration is changing the social landscape and generating tensions between immigrants (Bolivians, Paraguayans, Venezuelans) and resources-starved populations in Argentina.

During our own talk, we explained the migratory flight process that is happening in Venezuela, following our local problems, pointing to how humanitarian geopolitics are also being modified in neighbouring countries.

During the second part of the day, we were able to participate in a forum debate about the importance of communication and media to our work. The discussion was compered by FAIt comrades responsible for the publication of Umanitá Nova (now nearing its centenary), continuing with the participation of sections of Britain’s Anarchist Federation, who presented strategies to improve communication processes within the IFA. The creation of a broadcast list was also discussed based on an idea from the FAIb comrades, in order to expedite the process of publishing materials, both for future publication on paper as well as online. At this point a fellow from the Sicilian Anarchist Federation joined the congress, who, among other things, showed us their collaboration with people in Venezuela and the Caribbean Sea area, as well as the appearance of a new segment in their newspaper Sicilia Libertarian dedicated to the anarchist movements of the world, beginning in July with the first section dedicated to Latin America.

In the third part of the day and at night, we were invited together with comrades from Brazil and the Japanese partner to participate as opening speakers in a public event, “Populism and Authoritarianism” in the Tabor Square of Ljubljana. At this forum we were able to expose in more detail how the shameless authoritarianism of the Chavo-Madurist regime has been consolidated, as well as providing information regarding the violation of human rights and the increase of executions by groups such as FAES (Venezuelan National Police), as well as expressing our intentions for combating the current propaganda of mainstream medias at the service of the left or right authoritarian-Statists.

The participation of the Brazilian comrades focused on highlighting the racist character of the Bolsonaro regime as well as the presence, in the popular sectors of Brazil, of militia movements and squadrons of extermination. The intervention of the Japanese comrade was focused on the authoritarian and nationalist character of the Japanese regime, which is relying on events such as the next Olympics to exacerbate nationalism in the population, while implementing ever more sophisticated methods of population control and supervision through mass surveillance and behavior analysis.

July 26th
Friday was marked by two debates of general interest to our organisations.

One was on modern totalitarianism, moderated by the Slovenian delegation, which gave an excellent opportunity to discuss this facet in our societies. The second debate was about the class struggle today, proposed by the Francophone Anarchist Federation. As a third morning event, there was also a workshop on internet security, proposed by the companions of the German-speaking Anarchist Federation.

After lunch we participated in the methodology workshop for the creation of strategies led by the German-speaking Anarchist Federation, where we learned to design a plan to identify the best way to obtain the desired results depending on the initially proposed objectives.

At the end of the afternoon session, the Argentine comrades presented to a public talk on their experience at a Free School which they manage (the Escuela Libre de Constitución), generating an interesting exchange of information with the people present.

To conclude the day of the comrades of the Francophone Anarchist Federation, they began an interesting debate about ecological struggles, which was followed by the participation of other compasses as well as the public present in this open section.

July 27th–28th
The penultimate day of the event was intended for general discussions about the future of the IFA, as well as meetings between the participating federations.

The new secretariat will be left to the comrades of the Italian Anarchist Federation. For the organisation of the next congress no agreement was reached as to where it will be, and therefore who would organise it, but the discussion has been started.

The rest of the morning was dedicated to exchanges between the different federations, as well as interviews. It is worth highlighting the interview conducted by the Belarusian comrades, where there is a knowledge of the links of the rulers of both countries and with other dictatorships of similar type. We also spoke for a long time with the comrades of Umanitá Nova as well as with the rest of the Italian group.

For the afternoon session different communiqués from each of the workshops that were held were discussed, giving them final form in which they will be published (these will appear on the IFA website over the next while). One of the most interesting and discussed was on migration processes, as well as the communications workshop.

The day ended with a public debate about the work of the IFA as well as the practices of the different federations, offering information to people outside the congress.

Sunday 28th was dedicated to internal discussions between federations formally affiliated to the IFA, in which we can not participate, but we will continue discussions with the representations of Brazil and Argentina, to publish a statement from South American groups following an application by the Italian comrades.

We want to leave here our deep gratitude to the French Federation that served as an intermediary for this invitation; to all comrades of the different federations for their deep interest in the Venezuelan problem and our position on it. And finally, we thank the organisers of the event for the impeccable implementation of this congress, on behalf of our collective, thank you very much for this invitation.

(Original article by Freedom can be found here) 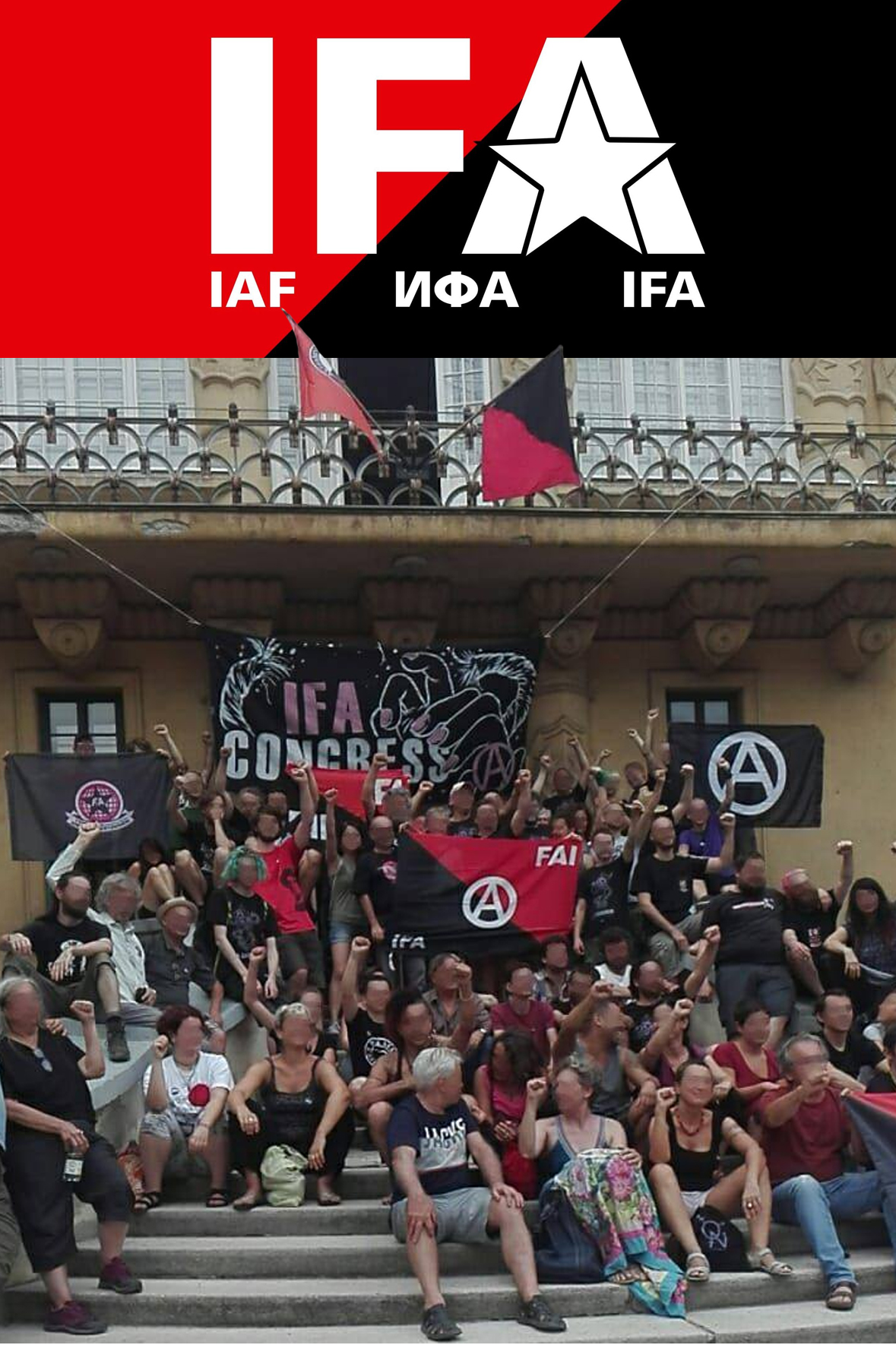