Good morrow, fellow angry mobsters. Today I have two thingummibobs to share with you. Been a while, eh? Yeah, I’m bad at this.

Ok, one of those is actually exciting. Organise! 92 is rammed full of super interesting articles which you will find enjoyable and stimulating. Go here & read it: [HERE!], then come back & listen to me waffle.

I had a fairly specific brief for this, which helped as I found it verry difficult to be passionate about this subject. I’ll go into that a little more below, but to be clear, this illustration is of a red & black flag on a red/black star flagpole, representing the triumph of working class solidarity through anarchism over the division and disorder of the UK/EU schism.

Here’s the previous draft, which used a white background on the UK flag stripes. I thought this looked garish and, well, it sucked, so I started over. I much prefer muted colours, and these stripes detract from the important flag. I wasn’t dead happy with the way that turned out either, since it’s too buried to make out any black areas, and the red makes it look more like a cabbage leaf than a bold ensign of class war.

Brexit makes me blummin’ miserable. That’s pretty normal, I hear. Disagreements cloud political spaces and take up space that could otherwise be used to organise(!) proper resistance to the bosses and their guards. Sure, there are some Lexit arguments. I have no time to rehash any of those… cos the big secret is, the EU doesn’t actually matter. Brexit is about everything else surrounding the EU membership. Freedom of movement, refugees, poverty, workers’ rights, these are all connected issues that revolve around the Brexit divide, whether they’re a result of EU membership or not.

I voted Remain, and if there’s another vote I’ll do it again, because I owe it to my European friends and family not to shaft them. ‘Leave’ means rejecting solidarity with many good, committed people who keep our movement alive. Brexit is driven by isolationism and xenophobia. I don’t want The Bastards to deport my friends, and The Bastards are definitely in charge.

Fortress Europe is a horrific place for those caught on the southern and eastern borders. Ignoring it and cutting ourselves off will only make it worse. I know people who travel from Britain to provide support as close as Calais and as far as Greece, who do excellent work to help refugees fleeing wars that Britain is responsible for. Restricting the people who travel to help will only make the situation worse for the people who need help. More will die.

But… whatever happens, the cracks are deep. We will all need to look out for each other more than ever, whatever happens next. That’s what this picture is about. Nations and states are power structures, which will force together and tear apart communities as they see fit. That’s what happened here: they forced communities apart. We need strong working class organisations, capable of engaging, supporting and defending communities against exactly the sort of division that is tearing us apart. That’s the Red-&-Black flag of Anarchism, rejecting nations and states, for working class solidarity.

Oh yeah, it’s all that idiot Dave’s fault. Dave who? Ohhh, the guy who ALLEGEDLY fucked a pig. Here’s that high-quality commemorative print again, which you can own in exchange for beans: “The Boar of the Bullingdons!” ■

Check out more art by Remember '68 and read their blog here. 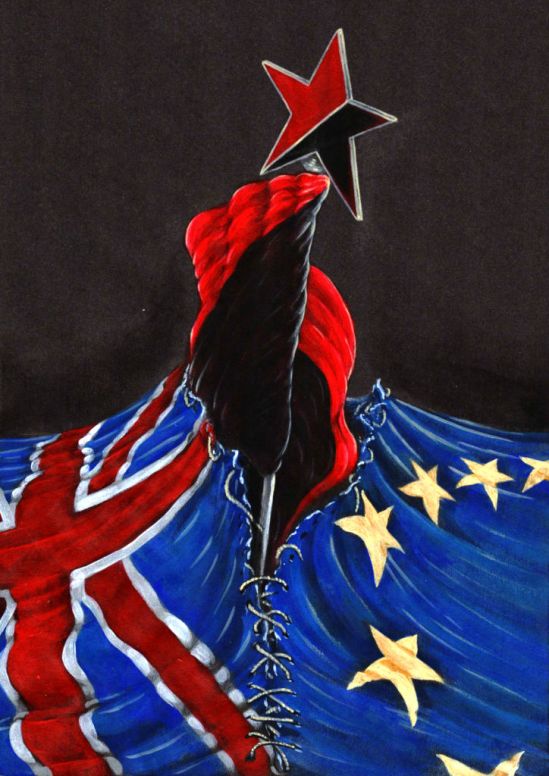