The follow is a Report on the NO PASARAN! demonstration of September 14th from comrades with the Anarchist Political Organisation (APO) of Greece.

On Saturday, September 14th, the crowded demonstration against police occupation and drug-mafias in Exarcheia, the pogrom against refugees and immigrants and their displacement from the neighborhood, the repression of squats, self-organized spaces of struggle and social and class resistance took place. This demo marks the completion of a first round of mobilizations within the wider campaign which was called by the NO PASARAN! assembly, in which we are participating along with the K* Vox squat, the squats from immigrants and refugees Notara 26 and Spirou Trikoupi 17 – one the squats that was evicted-, the anarchist antiauthoritarian social space Antipnoia, the Self-organized social space of Galatsi Stegastro, Class Coutnerattack (group of anarchists and communists), the anarchist collective of students Arodamos and individual comrades. Many comrades and collectives from Greece and internationally responded to this campaign and organized many solidarity actions and mobilizations.

Over seven thousand people of the struggle, anarchists and antiauthoritarians responded to NO PASARAN! call which was supported by many other calls of political, social and class collectives, amongst which the base unions’ call to a common bloc, and filled the streets of the center of Athens. During the demonstration, we distributed many flyers and shouted slogans such as “No step behind, no submission, let’s crush repression on the streets”, “Everybody in the streets and the squares, Police and drug-mafias out of Exarcheia”, “We are together with immigrants, refoulement of cops and mafias”, “Solidarity is the weapon of the people, war against the war of the bosses”, “The right is on the revolted’s side, not on the side of the submitted and the snitches”, “war against the cops and the drug-mafias, we will not let the squares to be turned into butcher houses” and slogans related to the commemoration of the six years from the murder of Pavlos Fyssas by Nazis of Golden Dawn. The large number of demonstrators, the dynamics and the pulse of the mobilization, is an astounding response to the repressive operation of the state but also to the ideological propaganda of the media which attempt to isolate and criminalize those who do not submit and are still resisting against the anti-social and repressive plans of the state and the capital.

Just after the end of the demonstration in Exarcheia square, the state unleashed, as a response, a brutal attack of the riot police in the near-by streets, beating violently and suffocating by teargas many people who had either participated in the demonstration or were just coming by. During this attack, four youngsters were detained randomly among others and were later charged with unsubstantial fabricated accusations. The conspiracy which was staged against them is a blatant persecution of political motivation in an attempt to terrorize the people of the struggle and reverse the wave of class and social solidarity which was expressed earlier. If they believe that they can intimidate and repress resistance they are mistaken.

The grand mobilization of September 14th is a valuable outcome for the movement in the future, a barricade for the collective defense of the structures and the people of the struggle and the social and class resistance in general. But also it is a first step towards the direction of organizing our social and class counter-attack, for the overturn of the world of authority, for Social Revolution, for Anarchy and Libertarian Communism. ■

AGAINST THE STATE’S REPRESSIVE CAMPAIGN

NO SURRENDER – NO TRUCE!

PS1: The four people arrested in Exarcheia on 9/14 were released.

PS2: Few days after the big demonstration, the state continues its repressive attack invading and evicting two housing squats for refugees and immigrants in Athens, and removing the political kiosk from Exarcheia square, a structure of the struggle against state repression, drug-mafias and social cannibalism. 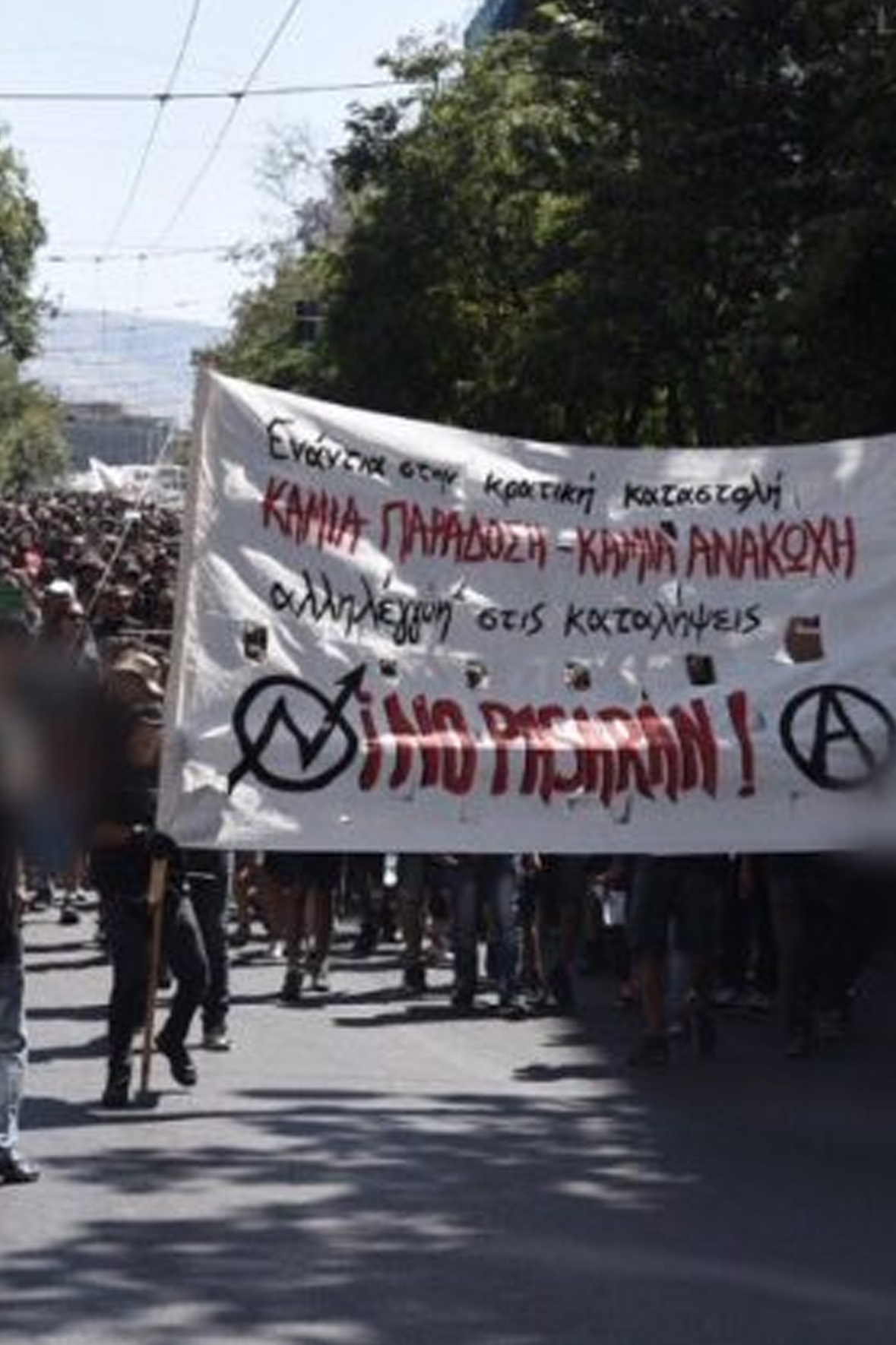