Latin America and the Caribbean are in Flames | International

The triggers might be different but they all have more than our blood in common. Every struggle in the region is connected. Decades of oppression, poverty, inequality, femicide, discrimination, racism, draconian economic measures imposed by US backed neo-liberal governments, who are still selling our resources and displacing Indigenous peoples, and who have no qualms about using the full strength of the army and police force to repress our people and imprison, torture, disappear and kill anyone who dares protest. Students, Indigenous Nations and Afro descendent, , Workers, Women, LGBTQ people.

We can examine the causes of the uprisings in each country, created by colonisers to separate us, but in a way the triggers are just the tip of the iceberg. It is much bigger than that. It goes back to the invasion and genocide but we can just focus on recent years.

We need to be clear that Ecuador is not just out in the streets because of the rise of fuel prices, Chile is not on strike just because of the hike on public transport fares, Mexico is not just destroying itself because of a few bad narcos, Haiti has grown fed up with extreme poverty, Honduras is not just about the fact that the US approved president’s brother is involved in a drug dealing scandal.

Our continent never truly decolonised mentally and in practice. The Indigenous Nations and Afro descendants never benefited from the processes of independence despite shedding our blood in the wars, which were led by criollos (white children of Spanish born in Latin America), the Natives were cannon fodder and abandoned when it was tie to re distribute the lands and profits. Even now, communities and whole towns are being forcibly displaced and even decimated, to make way for Canadian, US, and British mining and fracking companies, whose revenue does not stay in Latin America. And the caste system imposed by the conquistadores never disappeared. White people still rule, Mestizos work for them, Indigenous people are in poverty and suffer great levels of racism, Afro descendants are 4th class citizens, their histories forgotten, even in the classrooms.

The other big issue is how they rule us and educate us. Corruption is ingrained in every sphere. The ruling class is openly there to serve themselves. Fraud in electoral processes has always been the norm and we are resigned somehow. If any government makes real progress for the working class, they are murdered, like Chile’s Allende, or charges are made up to imprison and establish a far right government, Like Lula in Brazil who is locked up with false charges of corruption which led to Bolsonaro’s victory. Venezuela, Bolivia, and, of course Cuba, have emancipated their countries and gone to a mediatic war with the US and suffer blockades and even attempts of coup d'etat.

That is briefly the context where we move now. The eruption of protests in all the continent are not shocking or out of the blue. And the protests are radical. There are sectors who have even been traditionally conciliatory and centrist that have now been radicalised, more so because of the fascist-like response of all the governments, which are right wing like in Ecuador, Peru, Argentina, Colombia and Chile.

Indigenous peoples are now leading the struggle, and they refuse to be forgotten and tokenised any more. They are fighting for all, and to get the rights to their ancestral lands and stop the destruction of the environment and the theft of our resources. They are keeping our culture alive and decolonised.

Chilean students, Ecuadorian indigenous are being killed, the media is silent, willingly or shut down with guns. And little coverage has been done in the West even by the Left. Haiti has been out in the streets for seven weeks and the no one knows. The work of the capitalist system is not just killing people in protests but in the mind of the people. Derogation of blame, dehumanisation, devaluation.

It is true the cartels in Mexico and Central America control a big part of some cities and villages. Narcos are barbaric in their fight against each other and many innocent people have been victims, murdered or kidnapped, or coerced into working for them. This has always been the case. But, as a child growing up in Mexico, the level of drug related crime was minimum, and , not glorifying them here, they built roads and helped towns when the Neo-liberal governments refused to even open schools.

In the 2000s this changed with President Calderon, not just in Mexico, as the US blessed the so called war on drugs which escalated on a war against civilians and anyone not complaint. Nine women are killed a day, children are being recruited, people kidnapped. The fallacy is the government is taking action. The government are the narcos. And the police and army are involved to the core.

In South America the narrative has been simplistic claiming the revolts are about fare hikes or petrol. It is not, as I previously stated. In Chile’s 40 year old ‘new democracy’ they have suffered cuts and austerity in health, education and pensions. 30% of the income is in the hands of 1% of the people. Water is privatised, constitution is from Pinochet times. 10% of the state’s copper industry goes to the armed forces, and Pinera’s right wing government has gone from promoting Chile as an ‘oasis’ ‘a miracle’ to ‘we are at war with a powerful enemy” in one week. A very unequal “War” that has weapons and repression on one side and pots and pans on the other.

All the governments facing rebellions now have, obviously, blamed Venezuela and Cuba, easy escape, but in one way, Pinera is right in one single thing. The enemy is powerful: It is the Chilean people. All the Latin American people are rising and this time I doubt they are going to stop till we are truly free from oppressive governments and USA and FMI interventionism. .

Tais is a Mexican Native and activist based in London. She has been part of the student and Indigenous movements in Mexico and has been involved in animal rights, Antifascism and solidarity work in Ireland and the UK for many years. 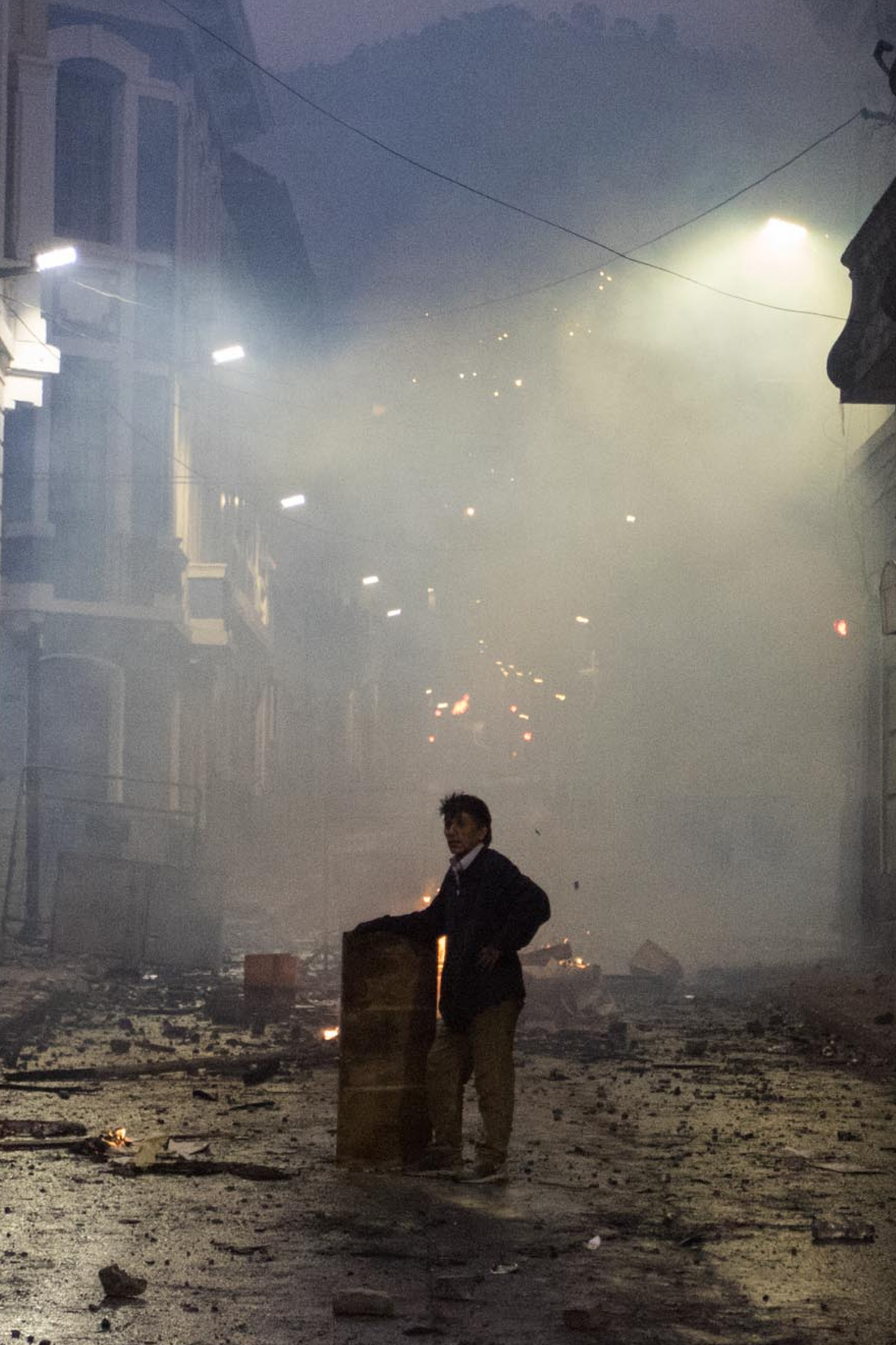