This is a call for solidarity with Ruymán Rodríguez, anarchist repressed, tortured and persecuted by the Spanish state for housing the poor. Below is a statement by GAF London as well as a translation of the one released by Federación Anarquista Gran Canaria. These two pieces were originally shared via Green Anti-Capitalist Media (here). Ruymán Rodríguez is the author of Street Anarchy, a collection of three articles which we translated and published May 2020.

The editor wishes to express our complete solidarity Ruymán and other Anarchists who are suffering at the hands a brutal and uncaring state. Solidarity is a weapon of liberation and you comrades, have mine. - P

Here is the statement by GAF London followed by the translation below.

We’ve translated an statement published by the Federación Anarquista Gran Canaria (Gran Canaria Anarquist Federation) where they detail the political persecution of their member Ruymán Rodríguez, who is facing false charges to cover up the brutal violence they inflicted upon him as part of a ploy to repress the radical housing movement in Gran Canaria. The FAGC he’s part of has been involved in a very successful social movement for housing in Gran Canaria and has helped hundreds of families left abandoned by the state. Like any other threat to its legitimacy, the state couldn’t allow this to continue unchallenged.

This happens as the protests for the political incarceration of Catalan anti-fascist rapper Pablo Hasél continue. And if fact just as it’s announced that 8 anarchists have been arrested accused without evidence of participating in the burning of a police van during these protests. This is is clearly a move against the whole of the anarchist and anti-authoritarian movement, which they seek to use as the scapegoat to try to smother the flames of revolt spreading all over the Spanish state after years of pent up rage for the many injustices the people have suffered under it.

It’s also difficult not to notice the significance of this happening only a day after we remembered the anniversary of the death of Salvador Puig, an anti-capitalist killed by the Francoist regime in what became the last death sentence in Spain to date, precipitating the end of the dictatorship soon after. As we can see, the transition to democracy made little in the way of stopping the political repression or solve any of the issues accosting the people. Rather, it has allowed for the crimes of the dictatorship to go unpunished and for all the institutions that create misery for the people, such as the guarcia civil that tortured Ruy, to continue operating unchallenged. This is the nature of democracies: a more stable and cunning form of domination.

We therefore cannot see this as anything else but as the continuation of the campaign of social warfare states wage against their people to keep them under their rule. This war is always takes place unilaterally by the state even when there’s not significant opposition to it, but it escalates as soon as its subjects attempt to fight back by abandoning the useless calls for civility and non-violence, the meaningless gestures, marches and electoral aspirations. The arrival of a the “most progressive government in the history of the democracy” in Spain has done nothing to stop this. And in fact, it has allowed it to continue more efficiently and brutal than ever by buying the support of parts of the left with electoral promises of representation.

It’s in this context that we call on all members of the international anarchist, anti-authoritarian and antifascist movement to extend their solidarity to Ruymán Rodríguez and the FAGC as well as to everyone else suffering the repression of the Spanish state. Just as they ramp up their campaign of violence, so must we increase the intensity of our fight for freedom. Messages and shows of solidarity are needed, but also actions that target the state and its institutions. No matter in what part of the world you find yourself, our enemy is the same. And any threat to one of its parts affects the whole. Let them feel the fear of those who won’t bow down to their violence.

Solidarity with the victims of state violence!

Burn down the prisons, free all prisoners!

This is translated statement originally published by the FAGC:

We’ve been notified that on the next 24th of March our pal Ruymán Rodríguez will be taken to the court. “Casually” it’s been little more than a month since we came back to have a presence online. The prosecution asks for 1 year and 6 months of jail time (and a 770€ fine) for a baseless crime of “assault against authority”.

Let’s illuminate the background of this case. End of April 2015. Ruy is about to leave for his job (taking care of the elderly) when two guardias civiles (Spanish militarized police force in charge of civil policing) approach him in the bus stop of Guagua. Without even identifying themselves, they kidnap him and take him to the station.

There it starts the session of insults, death threats, abuse and finally slaps, beat ups and strangling…they only stop after he starts spitting blood.

Ruy refuses to make a declaration, requests the Habeas Corpus, medical assistance and that a lawyer of his choosing is informed. He also threatens them with publicly denouncing the tortures. Like he finally did. This is when the guarcias civiles start to be afraid. They haven’t arrested a helpless person incapable of reacting. This is where the accusation of assault against authority is born, to justify Ruy’s injuries.

They accuse him of kicking in the groing one of the guarcias civiles who was torturing him in the interrogation room. The accusation of assault against authority, a “crime” that happens after the arrest, is also an attempt to justify the police actions.

They justify the kidnapping due to the need of identifying Ruy because, according to them, he refused to identify himself. And why was it supposedly necessary to identify him? Because of an accusation made by a person who entered into “La Esperanza” community without permission, without giving any of the required documentation and who made an accusation against all of the “Rehousing Commission” that came to confront him. These are the requirements (in Spanish). In total 6 people were accused of “coercion”. None of them, logically, were arrested. Ruy, the only one who wasn’t present when this took place, the only one whose name the accuser must have known, is “casually” the only one arrested.

Do you think that’s where this this pantomime stops? When Ruy was arrested it had been days since the accuser, to whom we had been able to explain the rehousing protocol, HAD ALREADY WITHDRAWN ALL THE ACCUSATIONS. There was no reason to identify Ruy, or to detain him or to arrest him.

This is the truth: since 2011 the FAGC has been taking actions that the system couldn’t assimilate. Hundreds of expropriations and rehousings and hundreds of evictions stopped. We’ve helped more people to access a house than any other institution in the Canary Islands. We’ve also promoted the biggest housing socialization project of the Spanish state: 76 families, 200 people, most of them kids, living autonomously in “La Esperanza”. Currently there are 10 other communities of similar characteristics only in this island.

“La Esperanza” was a cause of distress for the Guarcia Civil in Guía. An ancient municipality with high standard of living, but little social and cultural activity. As the Community grew so did the police hostility. During the almost 24 hours the police had Ruy arrested the guarcias civiles said things to Ruy like “you are making Guía full of scum”. Also “go to Las Palmas to burn containers and leave that rehousing shit already”.

The hate for the poor by the police and the institutions and the government’s worry that an incipient anarchism got in contact, after many year of self-isolation, with destitute families, migrants and the homeless. This is the background to understand the arrest of Ruy.

They wanted to cut at its root what later would become a potent housing movement with libertarian influences that would end up crystallising in the “Sindicato de [email protected] de Gran Canaria”. They wanted to stop this: https://kolektiva.media/videos/watch/21e32246-2afa-42d9-a70a-c5d16c7cc9ba

We ask all the social collectives, independent media, etc to make theirs our demand of #RuymánLibertad (#FreeRuyman) and that they be ready to sound the alarm if the legal situation of our pal worsens. Without solidarity we are destined to be defeated.

They ask prison sentences for those who protests, fight and question. For those who, like in this case, have done nothing but help poor families to have a roof over their head. We are immersed in an escalation of repression which we’ll only be able to confront if we are united.

They want to punish Ruy because they believe that with this they’ll be able to destroy what we’ve been building for almost a decade in this island: a neighbourhood anarchism by the poor for the poor. They don’t understand what it means to face off against a social project that comes from bellow.

They are naive if they think we are going to allow them to crush us. Not even with all their gags they’ll be able to stops from continue to shout: “Bring down the walls of the prisons!” “Political or social, let all prisoners out” And of course: #RuymánLibertad (#FreeRuyman). ■ 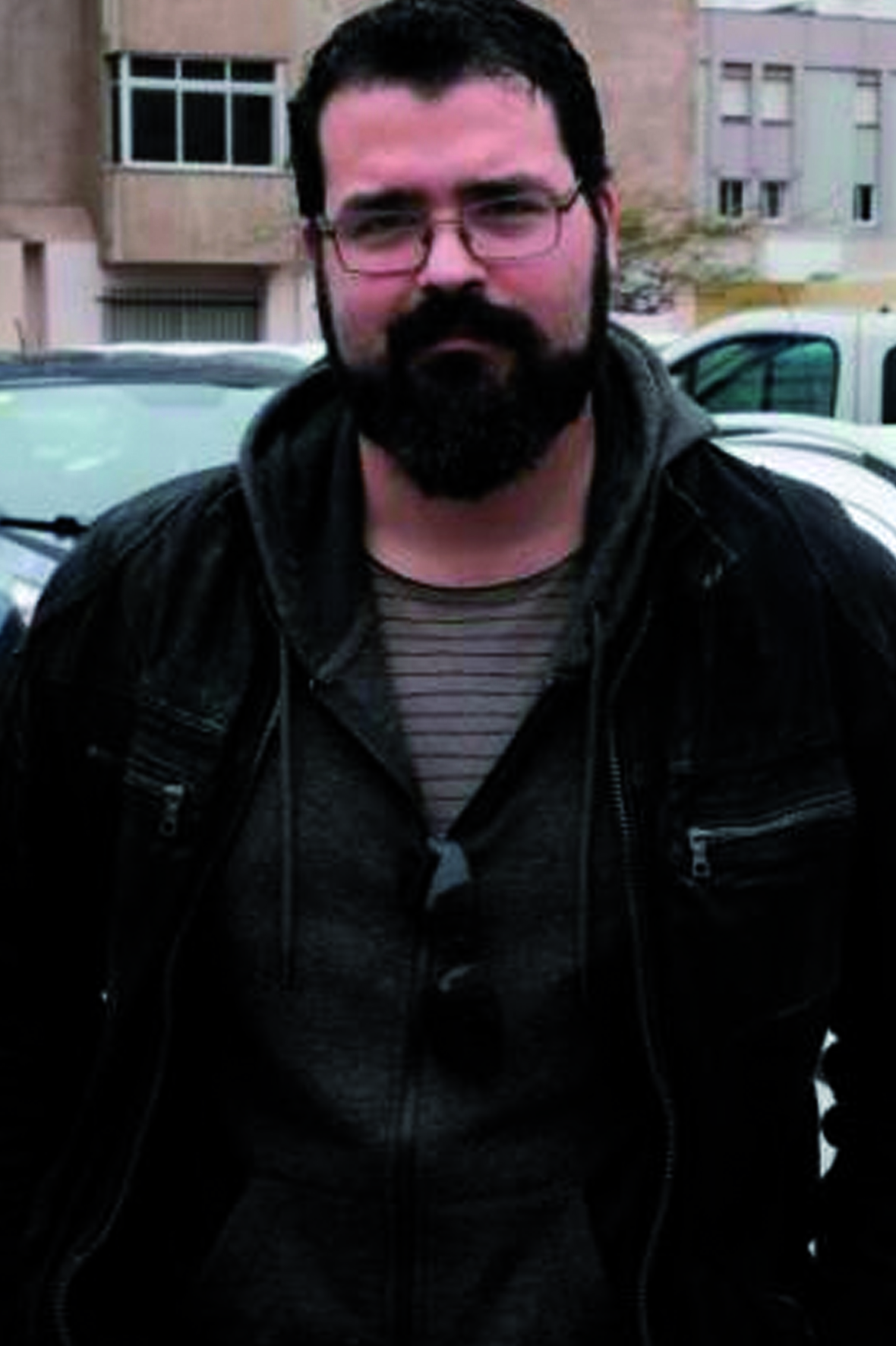