‘We also rely upon socialists of all schools who, being wishful for social reform, must wish for an exact and positive knowledge of the conditions in which the working class – the class to whom the future belongs – works and moves.’ – Karl Marx (A Workers' Inquiry, 1880)

Rising out of the late career work of that most renowned thinker and formulator of socialist philosophy, Karl Marx, the idea of the worker’s inquiry is one which has enjoyed far less popular success than many other ideas to which his name is often attached. The initial premise, formulated in the text mentioned in the quotation given above, took the form of a questionnaire which Marx created in order to gather information on the conditions of the working classes in France. Even during his lifetime, the success of this idea was far less than might have been expected – there is little evidence to suggest any workers responded to this survey, and it wasn’t until the idea was resurrected almost a century later by the Italian Marxists that it regained some semblance of life.

In essence, the function of the worker’s inquiry is to elucidate the precise conditions of working class labour, such that it can be more accurately understood and methods of resistance – whether individual or union based – can be planned with reasonable consideration as to the material nature of the work at the time, rather than purely ideological means. This necessitates the inquiry as a temporally limited methodology, as conditions will change over time and render each inquiry less accurate as time goes on. There is, therefore, an assumption of continually updated knowledge; a number of reports which succeed each other – Workers' Inquiry and Global Class Struggle, edited by Robert Ovetz and published by Pluto Press, attempts to provide a new and updated report on the conditions of the working class across a spectrum of labour.

Divided into three sections, Workers' Inquiry attempts an impressively broad description and analysis within a relatively short page count – fewer than three hundred pages are needed for essays which span transport and logistics, education, call centres, custodial work, manufacturing, and mining. While there are certainly elements of the labour market which avoid detail here, most notably the incredibly large and important world of service work, it is clear that the collection of essays gathered in this new work are an ambitious undertaking which seeks to demonstrate a clear picture of much of the labour market within a relatively compact space.

This level of accessibility continues within the essays themselves. While it is entirely true that Ovetz’s lengthy introduction contains a hefty dose of theoretical references and discussions of power, many of which are extremely interesting in their own right and give far greater context to the project of the collection than would make sense for me to give here, the majority of the book takes an altogether more overtly conversational tone that allows some intensely heavy material to be understood easily and without much in the way of barriers.

Beginning with the first essay in the book – Dario Bursztyn’s brief history and contextualisation of the Argentine trucker’s union Camioneros – we are treated to a splendidly well written and engaging history of the Argentine Republic’s tendency to ‘dodge’ the regulations of the Spanish, as well as the smuggler-trade relationship with the British Empire; the segue between this short history and the connection to Argentina’s ongoing semi-colonial economic relationship with Britain, culminating in the occupation of the Malvinas Islands (known in the UK to many as the Falklands) as a result, is executed smoothly and with an almost deceptive ease by the author. Despite the density of both time and material, the delivery is engaging and there is an undercurrent of enthusiasm in the writing which removes many of the potential barriers that such material might hold to those unfamiliar with the specifics beforehand. Further, the transition between the historical British involvement in the region towards the American engagement that waned in conflict with local labour laws and the opening of easier pathways towards capital extraction in Mexico and other places, is written with a well-balanced attitude towards the multitude of forces that conspired over time to encourage this change.

This focus on historical context may seem slightly odd in a book of such size. Indeed, while approaching the text for the first time I had a degree of concern for the dwindling of pages without having addressed the primary focus of the work itself – the worker’s inquiry. However, Bursztyn’s historical groundwork does not go to waste. Upon engaging with the modern day struggle of the worker’s, the contextual elements built into the historicisation allow for a robust and engaging analysis of the role of the trucker’s union as well as the common attitudes that make up the social power of the trade unions in Argentina without sacrifice nuance for ease of comprehension. The pivotal power of the trucker’s union, which holds a role of indispensable importance within the Argentine economy (Bursztyn informs us that ‘there is no sector’ which is not reliant on their work, and that a strike proposal from the Camioneros would leave everything ‘paralyzed’), is in direct conflict with the desires of capital to create easier modes of profit regarding trade – particularly as modern economic exchange shifts from the established relationship with the United States towards China – and the uncomfortable tension between the union and government which seeks to loosen their hold is outlined neatly by Bursztyn.

While it may seem odd to spend so much time on only a single essay, the reason for this is simple: the trends which emerge through the reading of this first essay return throughout the collection and often to the same effect. There are positives to this methodology – not only does it create a sense of linear progression which interesting and engaging to the reader, but the use of a firm chronology and the granting of key information allows insight into sectors that may not have been familiar to the reader in advance, but it also creates a series of limitations in the scope of the project as well. Focus on contextual information devours page-count which, in a book that maintains a relatively slim format, leaves slightly less room than might have been expected to recount the ongoing situation, and some readers may find the analytical tone of some essay’s conclusions to be a touch disappointing; there is little in the way of compelling suggestion or recommendations for action, for example. As a reader from an anarchist background, this makes complete sense to me; the decisions to be taken by workers must be made by those workers in those moments, and scholarship can offer only tools, but for those who seek direct prompt this may be a concern.

Further, the collection falls prey to two primary limitations – limitations which, I believe, are inherent to the idea of the worker’s inquiry in itself, at least as presented. The first is a certain sense of temporal drift. While the general conditions of the working class remain stable over frustratingly long periods of time, the specifics of the conversation are prone to drift rather quickly, particularly when placed in an international context. While well under a year old, certain elements described in the book are already no longer accurate: perhaps the most obvious of these is the mentioning of US President Donald Trump. While Biden’s role in the function of capital remains identical (something which would be true for any figurehead) this is one example of the sort of change which can occur relatively quickly in the specifics. These changes can only accrue in number over time, and this re-emphasises the need for a continual update of the inquiries if any continuity might be achieved. Nothing in this contradicts the book itself, but it does highlight the need for a critical eye whilst reading, and a concerted avoidance of taking any particular as true in all cases rather than true only to the specific moment being discussed.

The second issue present in the book, to my eyes, is the reliance on the assumption of the labour union as a site of struggle. While this is far from a unique problem to Workers' Inquiry and is in fact an issue which has plagued the history of Marxist organisation and elements of the anarchist movement as well – syndicalists, as Bonanno wrote, also rely on a ‘producers’ organism’ which has often tended away from the workers themselves, as in the Spanish Civil War – the issue must be highlighted if only to be held in the mind of the prospective reader. Luckily, this reliance does not find itself in monopoly; Patrick Cunninghame’s essay The CNTE Dissident Teachers’ Movement discusses a movement which, while certainly engaged with the struggle of unions, exists beyond merely those limits and instead combats the increasingly violent neoliberal policies of the Mexican government ‘locally, nationally, and globally’ by engaging the multiplicity of the Mexican poor, which are increasingly focusing on ‘autonomy, self-organisation, and self-management’ as opposed to ‘political parties, unions, and the institutions of the state’ in a manner that might seem encouraging to any anarchist, at least in potencia.

General scepticism towards unions of this sort is present throughout the book itself, often with references to the ‘class-collaborationist’ nature of unions as they are, but it is comparatively rare to see an outright declaration of the need to move beyond them entirely, and it is vital to have pushback of this sort in contrast to essays such as Alpkan Birelma’s The Case of TÜMTİS in Turkey, which – whilst otherwise engaging and well researched – takes a suspiciously reverent tone at times towards the union structure itself, describing TÜMTİS itself as having the potential to be ‘part of a new global labor movement which may reshape the world’ and as something that ‘shows that hope is still alive’ – something which strikes me as perhaps slightly too glowing in praise for an organisation structure with such a disappointing history. I admit, here, to potentially being coloured by my own presuppositions surrounding the labour union itself, sharing as I do the views of writers such as the aforementioned Alfredo Bonanno. My commentary here must be taken with the same grain of salt for this reason – your mileage may vary.

In conclusion, Workers' Inquiry and the Global Class Struggle is an intriguing piece of scholarship, presented in a way which is at once accessible and deeply engaged with the intellectual tradition of Marxism – particularly Italian autonomism, in many ways – while pushing interest towards the very practical, in a charming and encouraging marriage between theory and practice. While there are elements which deserve careful reading, particularly the moments which rest of temporal signposts which may already be slipping in some cases, it cannot be denied that the coverage is highly interesting and in many cases shows the continued life within the labour movement itself. Pluto Press itself introduces the book with the phrase ‘rumours of the death of the global labour movement have been greatly exaggerated’, and while one may argue about whether or not this is true, reading Worker’s Inquiry calls to mind another quotation, this time from American socialist Eugene Debs; ‘there is nothing that helps the Socialist Party so much as receiving an occasional deathblow. The oftener it is killed the more active, the more energetic, the more powerful it becomes.’

A spectre it is, then; an early Marx calls to his later self. ■

Jay Fraser is a writer, poet, and educator from the United Kingdom. His writing can be found in Organise!, Lumpen Magazine, Green Ink Poetry, The Tide Rises, and elsewhere; he also has writing upcoming in Strukturriss, and is currently writing about the political implications necromancy and industrial music. Find him on Twitter @JayFraser1 if you are so inclined. 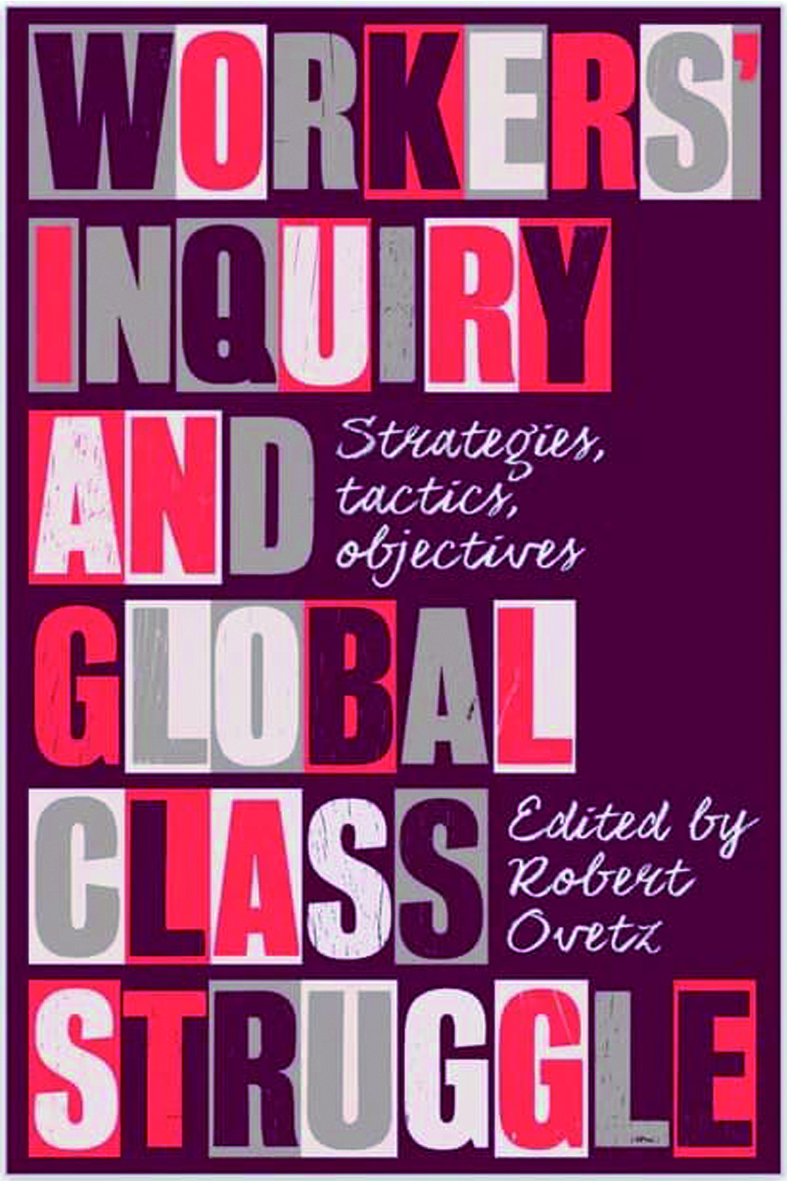