Confronting the State on its Own Terms, Dr DaN McKee attempts an ethical proof of anarchism as the only viable political project even by the metrics imposed by some of the most ardent defenders of the state.

Originating from McKee’s doctoral thesis, Authentic Democracy is, in essence, an attempt to provide an ethical grounding for anarchist politics without the jargon – to present an easy-to-read, accessible answer for one of the many questions that anarchists often find themselves having to answer: how can anarchists provide any moral justification for their ideas? After all, conventional wisdom would have it that at least we know that capitalism raises the floor and makes life better for the people, at least in general. Don’t we?

Taking this question seriously and anticipating this response, McKee’s response is a simple one. He attempts to answer the question – and in doing so, he underlines a serious ethical claim: that the role of the political is to provide a better life for the people. Beginning with discussions on exactly what is meant by ‘people’ and ‘better’, McKee attempts to pull the question apart before constructing a framework in which he concludes that not only is anarchism capable of providing this better life, but more importantly, it is the only political outlook which can do so satisfactorily.

McKee’s primary success in the writing of this text, re-worked from a piece of lofty academic writing, is the rendering of it easy. Beginning the book with a statement of intent outlining the desire to make it readable and remove the dense phraseology that existed to satisfy the philosophers at the academy who had been at least partially against the project in the first place, it is clear that McKee deserves great praise: if the intent of the book was to provide a readable text, he was successful. Reading briskly and with a conversational tone that weaves its way through the topic, McKee’s style and control of pace is one of the centrally impressive texts in this style that I have ever read.

The risk that is taken in doing this – in removing the more academic language from the text – is that the levels of nuance and specificity such language was often invented to provide comes into question. The major challenge in the text, therefore, is the preservation of a rigorous and powerful argument without the trappings of a specific academic discourse.

To an extent, McKee accomplishes this well: when asking what the book is attempting to do and whether it succeeds on its own terms, it is difficult to argue anything other than that it does. However, there are a number of axiomatic assumptions to which McKee falls prey – though he is far from the only one. The primary assumption McKee proceeds under is the assumption that legitimacy matters as a political concept. This assumption is one famously put forward by Noam Chomsky in a number of different forms across several decades, and is equally famously an assumption rejected by large sections of the anarchists with which it has come face to face. By far the largest difficulty that I have with Authentic Democracy is this initial framing of the discussion which places the text on somewhat questionable grounds to many.

The second largest concern, though not nearly so significant as the first, is the attempt to conflate anarchism with democracy – indeed, McKee argues that anarchism is the only system under which we could even begin to truly think about democracy in a legitimate sense. Making this titular assumption is a natural one for many people, particularly those who come from a background in the syndicalist tradition or any form of anarchism which relates more directly to the ultra-liberal framing put forward by Chomsky and others, but it is one that comes in stark opposition of many of the more contemporary branches of anarchist thought. The refusal of democracy, regarding it as an arcane and artificial form of engagement that can only result in alienation, is a common perspective within the world of insurrectionary anarchism and post-anarchist thought, and it is interesting to see McKee zig here where the contemporary discourse often zags. While discussions as to whether or not this is a wise idea might be interesting, it’s also noteworthy that this mode of common-sense discussion is paramount for McKee’s project: to make this discourse accessible without becoming too embroiled in the depths of debate. Here, again, McKee is successful, as a willingness to engage with the text on his terms yields fruitful results despite the potential for debate over specific terms.

Due to this contrast between the framing of McKee’s work and post-anarchist fields, there is, therefore, an interesting parallel between McKee’s text and another (though much less accessibly written) text from the 1990s: Todd May’s The Political Philosophy of Post-Structuralist Anarchism. This densely written text is one in which May finds himself embarking on a similar project: how, in the face of the last half-century of critical thought, do we ground anarchism as an ethical project? What is most interesting in McKee’s text, and a sign of his skilful navigation of the subject, is how close the conclusions drawn match those of May’s despite an almost entirely different pathway towards them. Whereas May reaches his conclusions via engagement with Derrida, Deleuze, Lyotard and Foucault – giant figures in the continental philosophy of the 20th Century – McKee begins his analysis with figures of anglophone philosophy, tracing the roots of the state and its authority to Hobbes and Locke, before proceeding through Nozick and Rawls. Further than this, McKee’s premise rests upon an acceptance of the idea of a social contract in some form. For McKee, this contract

A further interesting, though unexpected, strength of Authentic Democracy is the willingness McKee shows to engage with economics as a practice. While there is much debate about the place of economics in an anarchist worldview, it cannot be disputed that it is a vital element of discussion regarding capitalist and statist political perspectives and must be addressed by any serious thinker of these things, if only to dismiss the field. McKee does not dismiss it, and by engaging with the economic concerns of the state immediately after detailing some of the roots and effects of ideological social assumptions, McKee directly implies the marriage between the two which so heavily impacts much of modern life. Taking a swift route from the East India Company through to the IMF and David Harvey and Noam Chomsky, McKee effortlessly elucidates the uneasy tension between economic and political power and highlights the failure of representative democracy to reconcile the roiling conflicts inherent to such a system. For many readers who are not familiar with generations of left wing writing, Authentic Democracy is a brilliant introduction to some of these nuances, and McKee’s willingness to engage seriously with thinkers from a broad spectrum of political thought – from the aforementioned Rawls and Nozick, to the engagements with Gramsci, Marx, and Proudhon – will serve as a wonderful starting point for further investigation.

Finally, revisiting his descriptions of leaving the University to become a school teacher, McKee transitions into a discussion of the educational system under capitalism. Rapidly sketching an outline of education, particularly British education, as being a system that seems designed to produce incurious and fearful individuals that cringe under the watchful eye of a superior, McKee condenses many of the critiques of capitalist education into an impressively brief discussion that takes direct aim at the ‘conform and obey’ model of schooling. While this is perhaps the briefest section in the book, it is clear that it is also an avenue of criticism about which the author is particularly passionate, as the strength and clarity of the argument here reaches a level of almost irrefutable bluntness which is difficult to oppose in any real sense.

Summarising these previous discussions, McKee closes the book with a return to his original claim: that it is only anarchism which can satisfactorily fulfil this concept of providing a ‘better’ life to ‘the people’. While there are a number of semantic issues that can be taken with McKee’s lines of argument – some of which have been delineated earlier in this review – the simplicity with which he presents his conclusions is striking in tone. Despite not wholly rebutting those who would be critical from the start of concepts such as democracy, it is also clear that this is not McKee’s task in this book: he is willing to let those conversations take place elsewhere. The primary drive of Authentic Democracy is to confront the statist on their own terms: what claim does the state make in justification for itself, and from how many angles can we demonstrate that even on the state’s own terms, traditional notions of anarchism is a superior approach to the traditional notion of the state. In this, it is clear that McKee is successful – any further discussion, it is clear, is to be had from the position that the state is defunct as a concept. Post-anarchists and anarcho-communists can dialogue about the specifics, the frameworks, and the concepts – and these are certainly conversations that are vital to have, with far-ranging consequences – but there is no longer any need for us to spend time entertaining the notion of the state, which dies so piteously when subjected to even the most routine inspection of its own position.■

Jay is a writer from Lincolnshire in the UK. He is currently completing an MA in English Literature and has written for Organise!, Strukturriss, and Lumpen Journal among many other places. Find him on Twitter @JayFraser1 if you are so inclined.

Authentic Democracy is published by and the publisher Tippermuir Books: and is availabe though independant retailers such as AK Press.

For more information about McKee and the book (including a postscript on how Covid-19 does/doesn’t affect the argument in the book), visit everythingdanmckee.com/authentic-democracy 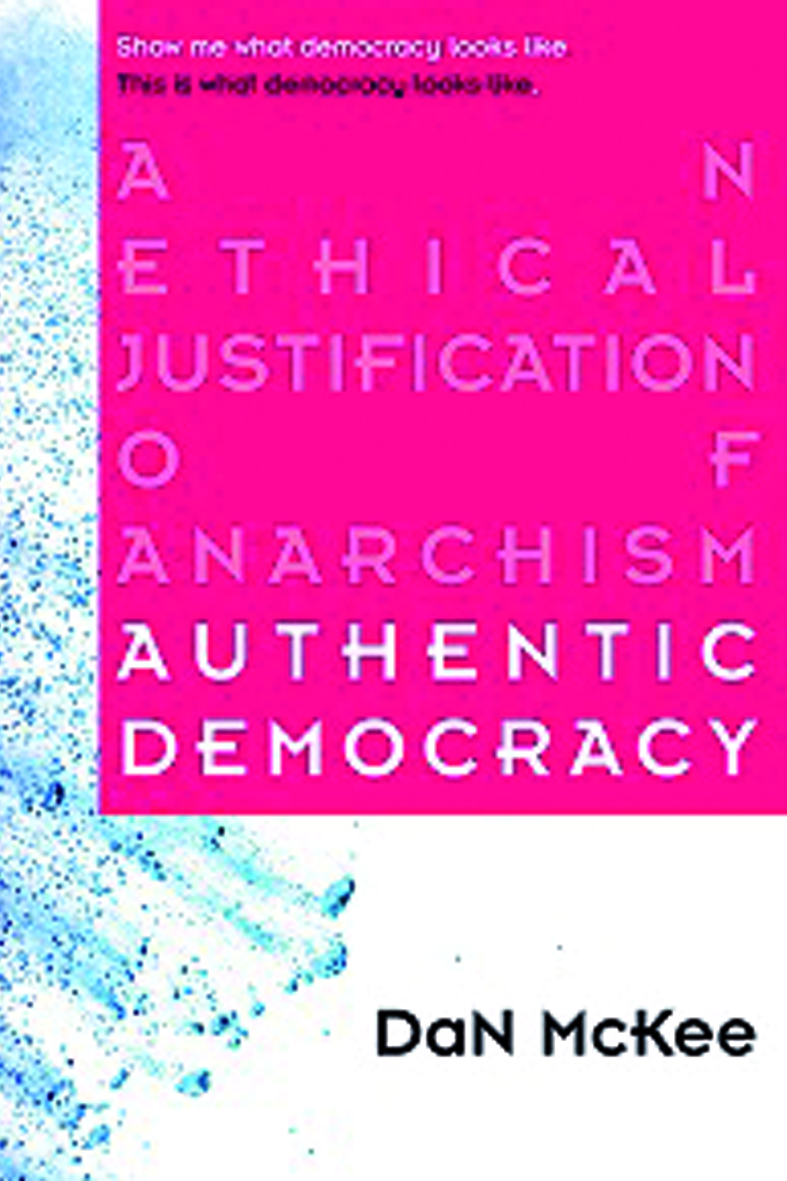