[TW: sexual violence]
Since Organise’s last update on Ethiopia, Prime Minister Abiy Ahmed Ali has announced that Eritrean troops will leave the region of Tigray in Northern Ethiopia. This comes as a surprise, since Abiy has spent the last few months denying the presence of any Eritrean troops in Ethiopia at all. Yet, even as he was denying the existence of the Eritrean troops fighting a war against a group he declared victory over in November, reports from the UN and Amnesty International were confirming that, not only were they there, they were colluding with Abiy’s government to carry out numerous atrocities. When they leave on their as-yet-unspecified date, a slew of corpses—which could very well number upwards of 100,000—will be in their wake. This prompts the question: who is Abiy’s audience for these lies? Who is a sincere believer, any more?

The flagrancy of Abiy’s lies are echoed in the obscenity of the violence. As accessibility to the region has grown over the past few weeks, Ethiopian and Eritrean soldiers have made little effort to curb their violence under this heightened scrutiny. On the 23rd of March, soldiers beat and threatened an MSF driver and killed at least four men extrajudicially while MSF staff were present. MSF also reported that “most” of their 100+ hospitals in the region had been looted or destroyed.

As is often the case, much of the genocidal violence redounds heavily on women, as Amharic soldiers talk of cleansing them of their Tigrayan blood. A recent article in The Daily Telegraph quotes doctors and nurses from the region: “Soldiers enter hospitals as they like. They cross wards and threaten patients, nurses and doctors. There were recently seven raped women from Zalambessa who disappeared from their beds after seeing soldiers in the hospital,” says a doctor in Adigrat. A nurse says her rehabilitation centre for survivors of sexual assault was threatened with closure in order to stop these stories coming out, but still the attacks continue and still the stories get out.

The story of Selam, a 26-year-old coffee seller from Tigray who was abducted by Eritrean soldiers with 17 other women in January, deserves to be heard in full [TW: extreme sexual violence, HIV]: “They [Eritrean soldiers] took us into the forest. When we arrived there, there were around 100 soldiers who were waiting for us. They tied the hands and feet of each one of us. And then they raped us without mercy. We stayed that way for three days. After three days the soldiers killed five girls who had been tied with us. They poured [alcohol] over our wounds. They danced standing over us.”

The story continues: “After the first attack, [Selam’s] abusers were waiting for her as she returned to her house from the hospital with contraceptives and post-exposure HIV drugs. “Why the hell did you want this? We want you to be sick. That is what we are here for. We are here to make you HIV-positive,” Selam recalled one of the men as saying.”

To try to suppress the stories even though everyone knows what is going on speaks to a regime unburdened by any need to justify its own actions. Without oversight, the cover-up becomes a mere formality which will allow for the execution of more and more extreme violence. As mentioned in the last article, the importance of an independent inquiry by the UN cannot be overstated. A joint inquiry between the UN and the Ethiopian Human rights Commision will not deliver justice, since the EHRC are state-funded and lack the trust of the Tigrayan people whose voices should be at the centre of the report. Pressure should be put on UN member states to help achieve this.

What next?
Abiy’s multi-ethnic electoral coalition—the Prosperity Party—and his dream of a more centralised Ethiopia looks more and more futile and more and more bloody by the day. With or without Eritrea, the atrocities are likely to continue for some time and there is a real possibility that the entire country will fracture or even balkanise, as the regional animosities which saw thousands dead and arrested in a wave of 2014 protests come to a head again.

What’s more, tensions with Egypt and Sudan over the Grand Ethiopian Renaissance Dam (GERD), which would give Ethiopia unprecedented control of the Nile’s water flow into those countries, are building. On April the 11th, talks between the three countries over data sharing came to nothing. Leaving the Kinshasa summit, the Sudanese Irrigation Minister said Ethiopia’s offer ‘implies suspicious selectivity in dealing with what has been agreed upon.’ Again, we see how the lack of trust in Abiy’s government could have serious ramifications for the region.

In light of all this, the upcoming 2021 elections (if they go ahead) may seem trivial, but given how much of the violence has been fueled by Abiy’s desire to cling on to electoral power, they have the potential to change the dynamics of the conflict. Abiy used the elections held by the TPLF last year as a pretext to kill thousands of civilians. The TPLF has since been excluded from competing and it remains to be seen what the ostracisation of the Tigrayan people from the political landscape will mean for the Abiy’s longevity.
Citing COVID struggles, the Ethiopian government has recently turned to the IMF and World Bank to raise funds, offering the state-owned internet provider Ethio Telecom up for partial privatisation and asking for a restructuring of its loans to put off repayment until a later date. The military has already seen its budget steadily increase under Abiy: per the human rights non-profit Omna Tigray, military spending currently averages 4% a year, while health spending sits at 3.3%. It is highly likely that this extra financial flexibility will be used to exacerbate the conflict further.

While we should be loath to put our faith in the world’s financial elite, this does provide the institutions of capital with the opportunity to put pressure on Abiy’s government and we in turn should pressure them to do so, by lending our support to Omna Tigray’s campaign on the issue.

Meanwhile, Abiy’s counterpart in Eritrea, Isaias Afwerki, who, like Abiy, previously garnered praise from the West (Bill Clinton called him a ‘renaissance African leader’) while committing numerous human rights abuses, is in a similarly precarious position. He faces being scapegoated by Abiy in order to deceive the international community, with EU sanctions already being levied at Eritrea, while domestic dissent over the country’s involvement in the unpopular war grows. The further destabilisation of Ethiopia though, could give Afwerki room to maneuver in the ever-tightening political knot that he has found himself in, as the hot potato would pass back into Abiy’s hands.

If Ethiopia does fracture then, the competing interests of Eritrea, Egypt and Sudan would complexify the conflict and snowball the violence. As ever, it will be ordinary people, like Selam, whose bodies will be pawned for the personal-political gain of autocrats like Abiy and Afwerki or sucked deeper into the scramble for ever scarcer resources.

On the 15th of April, two weeks after Abiy’s announcement that Eritrean troops would leave the region, the under-secretary general of humanitarian affairs told a UN security council that “neither the UN nor any of the humanitarian agencies we work with have seen proof of Eritrean withdrawal.” There have been reports of Eritrean troops indiscriminately killing civilians as recently as the 12th. Some have even begun to disguise themselves in Ethiopian uniforms. It would seem then that the withdrawal is yet another lie. Despite Abiy’s words, the genocide simply goes on.

The fact is that no one is a sincere believer. Not Abiy (despite his Pentecostalism), not his defenders and certainly not the oppressed and displaced Tigrayans. This is because the lies of politicians like Abiy, as with Trump or Bolsonaro, no longer aspire to sincere belief, so easily are they refuted. Their lies are mere instruments. Their ideological utility is not located in their capacity to dupe people into believing them, but in the continued violence they make space for by discarding the aim of duping altogether. If no one believes what they are saying, everything becomes negotiable. It is not then a case of ideology being “a set of lies experienced as true,” but “a set of lies experienced as lies, but acted on anyway”—or as the Marxist academic Theodor Adorno wrote, “the lie has lost its honest function of misrepresenting reality.” It no longer posits another reality, just debases the original, no longer demonstrates an awareness of one’s actions as morally condemnable, only a will to continue the morally bankrupt act. In short, there is no longer anything left to unmask, for the mask is already, obviously, painted plastic. ■

Part One - A Genocide With The Lights Off 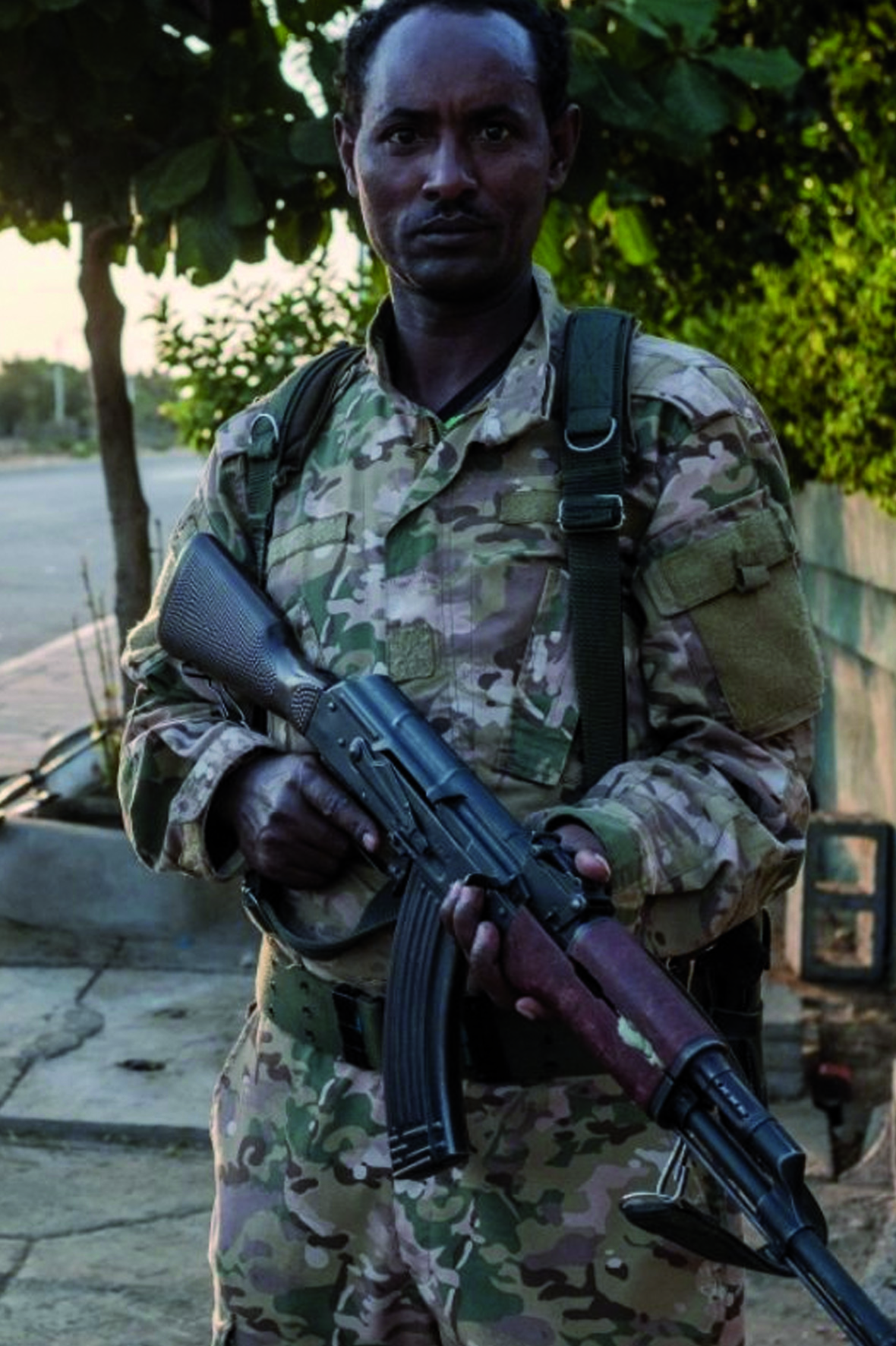