When you read this, COP26 will have finished.
The 500 or so fossil fuel industry lobbyists (the biggest delegation by far) will have concluded their business. The 400 or so private jets which were flown into Glasgow to discuss matters of climate, will have flown back home carrying the future of green capitalism and eco-colonialism.

The performative dance to keep the population trapped in sophistry, idle and placated, will be done. They billed COP26 as our last best hope for environmental stability. It failed.

One of the larger themes was Carbon Offsetting, let’s all get behind it they say.Well, You can’t offset hypocrisy, never mind that there is not enough space on the Earth to offset the carbon we are putting out. It would take more than five times the size of India to do so. Planting a “Green Belt”, whether it’s across Africa or the Pennies, doesn’t negate the Carbon being pumped out elsewhere, It’s simply not how it works. Even if all this planting happens in the green belts and across former farm fields the world over, this is new growth we’re talking about, it's not old growth, it's not a forest. It is in fact little more than cash crop, agroforestry and timber. The bio-diversity of these spaces is nothing by comparison. They say they want to end deforestation by 2030, well nearly 70% of wildlife has been lost since 1970, how much more are we going to lose in the next 8 years (and more) as the bastards drain every last bit of profit out of ancient woodlands and jungle that they can? Funny thing is, we have more trees now than we did forty years ago, a 2016 study illustrated this, but it has done little to alter the impact of expanding industries and growth capitalism, they mask their destruction behind being green, well fuck, you can't plant rows of trees which you'll chop down in a few years and say you're replacing ancient woodland. These caprious governments are one moment telling us that our forested areas are vital to the survival of the planet and the next signing agreements for further exploitation. Don't worry tho, we're all it it together.

I can't get over the fact they had the sheer audacity to podium Jeff Bezos. This despite the 465 million pounds of plastic packaging waste churned out by Amazon each year, you know the mega corporation with the carbon footprint larger than most countries. This privileged platform which could have been given to any of a number of climate scientists was instead given to Jeff despite just a few weeks earlier he was blasting off for a outrageously polluting 10 minute jaunt in space. Jeff spoke about being aware of our impact, despite taking a helicopter 120 miles followed by a private jet for 2000 miles to arrive at COP26 to give a speech. Jeff wants you to recycle, turn the temperature down, and consider limiting your carbon footprint like a good eco-minded prole. He’s Pledged $2 billion to a land restoration project in Africa. Amazon's revenue in 2020 grew 38% to $386 billion. Philanthropy from our great capitalist saviours as they throttle the life out of us. We are drowing ourselves for convenience, subjugating ourselves to economic tryanny out of a desperate fear that we might not be able to have packages arrive within 24 hours if the hippies win.

Oh and let’s not forget the fucking Malthusians from Population Matters and similar. They’re fixated on the idea that there are just too many dark skinned people on the planet. They want to use the injection of progressive values to gently encourage women to have smaller families and get educated to ensure they don’t doom us all with over population. Which I suppose sounds great until you think for two seconds and realise it’s a thin veneer over eco-fascism and 14 words. Their choice of language never quite getting to “population control” and “this is fucking eugenics with an environmental face lift”. No it doesn’t matter that the planet already over produces food to the tune of some 50% more than required. It doesn’t matter that serious famine is a collective choice, one which we make consistently due to political apathy and economic greed.

The planet is not overpopulated.
The profiteers are misusing it’s resources.

The global north, despite having a much smaller population account for the vast majority of carbon and pollution in general. The average carbon footprint of someone in Britain is 50x that of someone in Malawi and the average for someone in the USA is 3x ours. Even when you include the manufacturing industries of China or the garment industries in India... but like... who the hell you think they are producing that for? This is before we remember that in actuality the climate issue is also a class issue and even here in our delightful MEDCs, the truth of the matter is that the top 10% dwarf the rest of population for the tonnes of CO2 per capita, the top 1%, yeah you guessed it.
All those luxury jets really add up.

This idea that it’s you, the working class who can do something about it was a popular one this year, well it is a near omnipresent factor of life these past few years sure, but they’ve really been at it these past few weeks. It’s not like the oligarchs are ignorant of this disparity, heck the Financial Times is quite comfortable chirping on about it and yet The One Show won’t fucking shut up about whatever pat on the back project some school is doing or how you can take some tiny pointless step towards being less the horrible polluting bastard that you are. Look, they say, if everyone chipped in, we’d save the planet by X-Mas. It’s a sweet delusion, but that’s all it is.

There is only one solution to the cascade apocalypse before us and that is a rennaissance of revolutionary ideas, for the working classes to step out of consumerist suicide, collectivise their work places, localise their productivity and say no more to these ivory towered barons and the cretins in parliament still suckling on the rotten teat of an empire long since fallen.

Green Capitalism will not save you.
Only you can do that. Let go of your fear and take action.

COP26 tho, the pact is failure after failure. Heck they utterly failed to scrap the military exemption from carbon targets. Armed forces are not even required to count their carbon emissions and they are not included in countries’ emission reduction targets. This makes the targets nonsensical. The absolute limit of the climate change projections is an increase of 1.5 degrees. This is the absolute, we’ve already got too far, millions are going to die but if it get’s higher than this, we are going to see a grand collapse, limit that must be met.. The best they could promise was a 1.8 degree increase and let’s face it we all know that is twaddle, as consistantly the agreements laid before to equal applause have failed time and time again.

As I went through the agreement, picking out what I could from the obfuscated language my screen pinged with a notification from a friend, It’s a a promotional piece from an oil giant made for COP26 where they wax lyrical about how they are investing in green, however they need the profits from their ongoing and newly staked out fossil fuel operations in order to do this. It simply doesn’t make economic sense to save the planet from the murderous grasp of the fossil fuel industry, and let’s not forget, much of the early data that really consolidated our fears about the imminent threat came from research these companies did themselves. Decades ago. Capitalism by it’s very nature will continue to throttle the planet for ever ounce of profit until the death toll starts to harm the bottom line. This is what the nice man who appeared all reasonable and personable on the screen said. There is simply no other way to interpret it. They say it very clearly, it’s not a conspiracy or requiring years of peer review. We are fucked, millions will die, but come on, what about the share holders? COP26 stands before us and lays itself open and overt.They arn't even bothering to deny it anymore. The parody of environmentalism which is green capitalism will be the saccharine mantra as we suffocate and behind the scenes green colonialism, the tendrils of western states, continue to slither in and infiltrate distant lands. We have to win the trade war with China right?

Don’t worry tho, they managed to put together a mealy mouthed agreement to “phase out” the use of coal and a promise to stop deforestation...in eight years. It's ok. Promise. Coal will be phased out because it’s less profitable and new capitalist ventures are being put in to replace it. Bojo is acting like it’s a victory, that its the “beginning of the end of climate change”. He then flew home. I think it's vital that we remember those who don’t get to go home and forget about it until next year.

The indigenous comrades who came from around the world to find solidarity on the streets and in the kindness of Glasgow’s people. They’re deeply frustrated with the facade of interest, the speech making and apathetic ears. The hope that just one of these powerful leaders would show genuine interest in saving their homes from the industrial binge, all but snubbed out. They are on the front line, have been for decades, dying in distant parts of the world, unheard. Well that’s changed now. From West Papuans to the Waorani people, from Wallmapu to the Wet’suwet’en territories, the building might of indigenous communities are finding solidarity in each other. They will not be placated. For them this is not academic, or some future they don’t need to worry about yet.

The waters are here, the forests are gone.
There is no more time, it is already too late.

Ofcourse civil society stands with them and XR rebels shed tears for their pain, as both attempt to change the course of the avalanche with passive protests and political whispers, both hoping that a petition to the bastards killing the planet might some how be accepted. Alongside this tho there is this tremendous wave of solidarity and rage coming from the young rebels who flooded the streets. Across the country they are furious with righteous indignation and anger at the elders that have been failing them. Several comrades make a point of telling me how fantastically bad ass they were up in Glasgow, as one said “We were angry about student loans, they are angry about the death of the planet. They understand what it means and serious in a way we never were”. They don’t care to wax lyrical, they have a dark shadow looming and they are appalled that we have let this beast rise before them. More love to them. I hope they let COP26 radicalise them. I hope they take the rage they already have burning and let that grow exponentially. No more A-B marches, no more committees and endless discourse. No more rambling opinion pieces in Anarchist rags or griping into social media oubliettes. COP28 is in the fucking UAE. Green capital isn't going to save you.

We keep us safe.
We need a revolutionary renaissance and it seems that we’ll be getting one, so listen to the youth. They want us all to take to this task together, whatever your politics, whatever your age, where ever you may live. Let the rage of the youth take hold of you oncemore.

The waters are here, the forests are gone.
There is no more time, it is already too late.
We have to save the planet, by any means necessary. ■

(Edited. This was wrote and posted before a morning cup of tea and editing passes ;p) 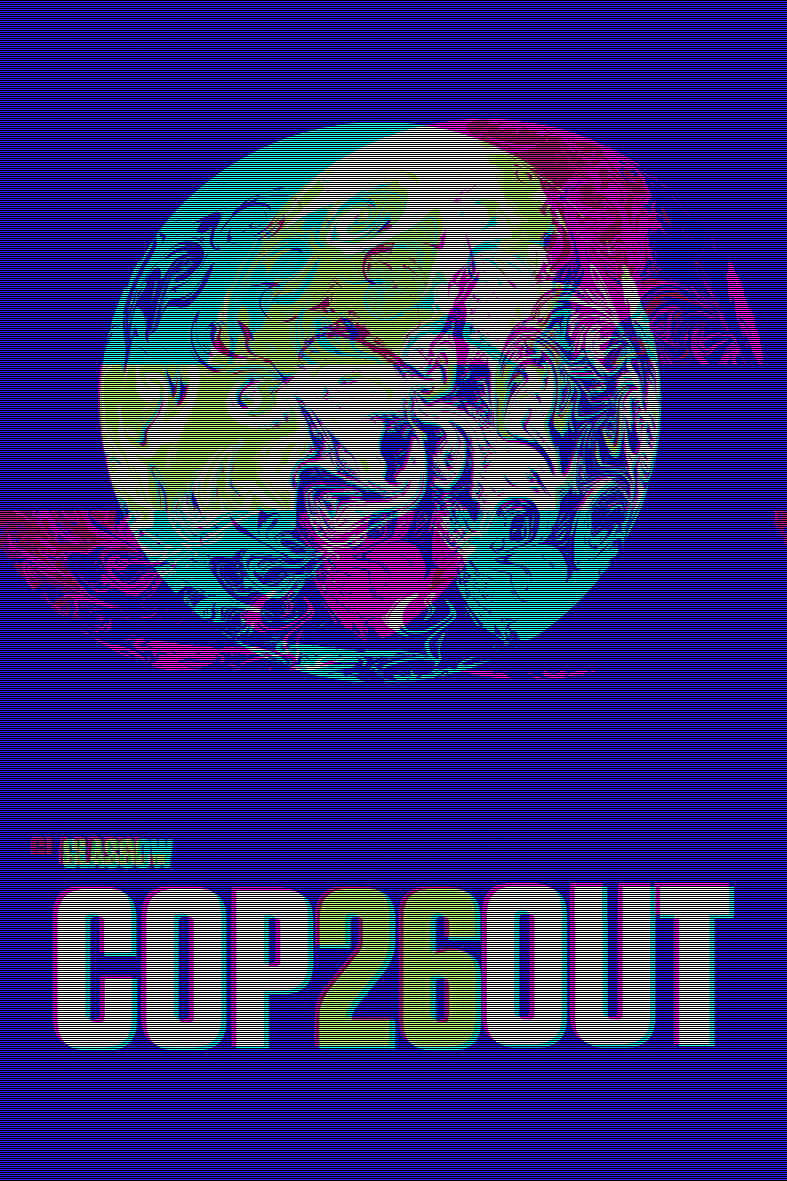