Let's talk about cops and security...

Let's talk about the cops...

“By the time… we were released… my fellow arrestees and I had become friends with these decent men trying to keep London safe from violence and crime.“

Here is the thing, The police are not your friend, not the ones in blue bips nor the ones who give you a coffee in the cells. They are never going to join the “rebellion” nor work to support any genuine dissent that harms the state of the capitalist industries they serve.

Folk were out yesterday in Southall demanding Justice for Blair Peach. Peach was killed by the Special Patrol Group,when the police chose to defend the National Front's “right of assembly” back in '79. They arrest 700, charged 350 and hundreds were battered by the cops. The cops covered it up. The bastards lied to cover it up and no one was charged. You can read more about it here.

He's not the only one, Mark Duggan, Ian Tomlinson, Rasdhan Charles, Smiley Culture and some 1750 other names killed by the police either directly or whilst in custody since 1990.

It's not just murder is it either there has been recent widespread infiltration of the Anarchist and environmentalist scene by spycops, these cops slept their way through groups, sabotaged actions and ruined lives. They literally ruined lives. These are not allies, these are not friends and even if pretending like they are allows liberal activists to come down in numbers it is a lie and it is directly harmful to those the revolutionary movement and it's setting up these kids your are sending our to be martyred for a bad fall.

Seventeen year old Ivi who features in the footage pf cops dragging protestors away is likely to take up a legal case against the police because they were not only grabbing people but kicking them as well.

Imagine never having had dealing with the police, still believing the notion that they are the good guys, have this re-enforced by the people calling you an “arrestable” you're full of stories of people coming out of lock up feeling all noble and satisfied, heck you've had a dance with them and you and the police liaison are on first names, you've connected over a mutual love of yoga and then you get a kicking from his mates.

“It was all really shocking and really harrowing for us all.”

It isn't just a passive response, the movement has created a space where the police seen as a favourable presence and a go too responce. More than once XR crew have resorted to using calling on the police as in the incident a coupel of days ago when one of the mob acused two POC of being pickpockets and sicked the police on them. Upon finding nothing the police started running immigration checks not just on the two accused but on a third person who stepped in to translate. Meanwhile the "rebel" who started the incident pulls aside a fella trying to help support the guys by letting them their rights to give him shit about "what if it was your mum being robbed" and to prattle on about the time he lost his stuff to fraud.

This isn't a “why aren't they revolting the way I'd like” thing - heck it's for revolutionaries to up their game and provide a platform for genuine tactically diverse revolutionary ecological action...
This is a “this group is directly putting the security of their activists and everyone they work with at risk” thing, actually it's worse than this... it's celebrating the oppressive forces who have killed our friends and comrades, who tear gassed XR in France at the same time as the police were applauded here and oh yeah who are part and parcel to the murder of hundreds of environmental campaigners a year around the world 185 in 2015 / 200 in 2016 - then you have the gal to tell us the rebellion started on the 15th and if we don't come we don't care about the enviornment?

But ofcourse middle class faces in London don't face these kinds of threats from the police, they don't have to worry about securing their comms and keeping their names off blacklists, so the weaponisation of various privilege sets, white friendly white middle class mums to kids and the “84 year old grannies” works, sad to say, it has. The police, observing your privileged status continue to re-enforce this stratification in our society by accepting your position, thanking you for the prior notice so that detours could be planned and proceeding to leave you be until the news twisted the nipple clamps.

When the black community of London assembled for a peaceful march on New Scotland Yard to call for justice for a lad the police had murdered, the police went in which such hostility it started the summer riots. The peaceful protest of hundred was hardly in the news.

So the police leave you be and you can be damn sure that's been noticed with several videos of Black and Asian Londoners utterly shocked at just how nice they are being to the protestors despite all the hullabaloo. The organisational make up maybe have been somewhat monochromatic but it's the police and media who have utilised that against you.

As overheard in a London boozer on Friday, two black guys chatting about XR... “if they were black they'd be in a ditch about now”...

This strategy with the police isn't naive, it's intentional. It runs through every aspect of the movement.
Relate to them and they will join us.. It's from the top down and it's not helpful. It's telling activists young and old, many of whom have limited experiance that the people fucking them over are their friend, that any minute now they'll be onside.. just keep getting arrested, eventually these individuals will act on their moral code and join us in forcing the state to act... or keep telling them you love them like in this utterly cringetastic example of bootlicking as police marched onto the bridge.

This is a shame because earlier it seems like some of the XR groups had genuine atuonomy and showed some hope, they labelled a pig and pig and didn't shirk the responsibility of being a rebel network. Until someone higher up told them off.

It's funny because this tactic as developed by Roger Hallam ie, large scale none violent dirct action to pressure the police into siding with you and forcing your way into negotions with the government is so removed from the reality.. it's not funny actually. it's down right dangerous. Like Roger says himself;

“The more dramatic the civil disobedience, the better. It’s a numbers game. You want people blocking the streets, but you need ten, twenty, thirty thousand. You don’t need 3 million. You need enough for the state to have to decide whether to use repression on a mass scale or invite you into the room. The gambit, of course, particularly in the U.K., is that the state is weak. It’s been hollowed out by neoliberalism. They’re going to find themselves overwhelmed. We will get in the room.”

This isn't India in the 1900's, it's not Thailand nor Venezuela either... There is no rebellious activity that will see the police turn and join us or even stand aside. They will be bouncing us of the tarmac as the planet draws it's last breath. This is the land of Peterloo, Orgreave and The Bean Field and nothing has changed except they'll spend longer sapping your revolutionary potentional and controlling you via crowd pacification. The Yellow vests started with a similar ethos, it was occupations and roadblocks and being civil to the cops except they m,,ade a mistake you didn't... They didn't manage to hide all the faces that cops see as acceptable to batter, instead of women and OAP's it was working class folk from the estate, it was the poor and the broken and the silly buggers actually thought about security culture, about protecting their idenitity with a mask and worst of all, they backed up their pals and kept them out of the cells. Now a dozen are dead and hundreds have taken severe injuries. The police chat to you, to keep you passive, an ouce of resistance and they will mess you up. Masks or no masks, resistance or no resistance, when command tells PC Jimbo who you've been chatting with to put the boot in you are fucked this has been the state of play since 1837.

You need to be better prepared for it and the organisation needs to talk to people about the realities of this.

How many times do we have to learn these lessons?
We've got twelve years you say?
How long will you waste informing the police of your intentions and then placating them to such a point that you undermine the impact of your actions?

We're all right there alongside you and the moment you stop putting our safety and that of everyone we love at risk with your collusion with the oppressor you'll have a whole plethora of radicals, long time environemntalists and activists from across the spectrum there backing you up, de-arresting and using diverse tactics to bring home the message and make change happen. 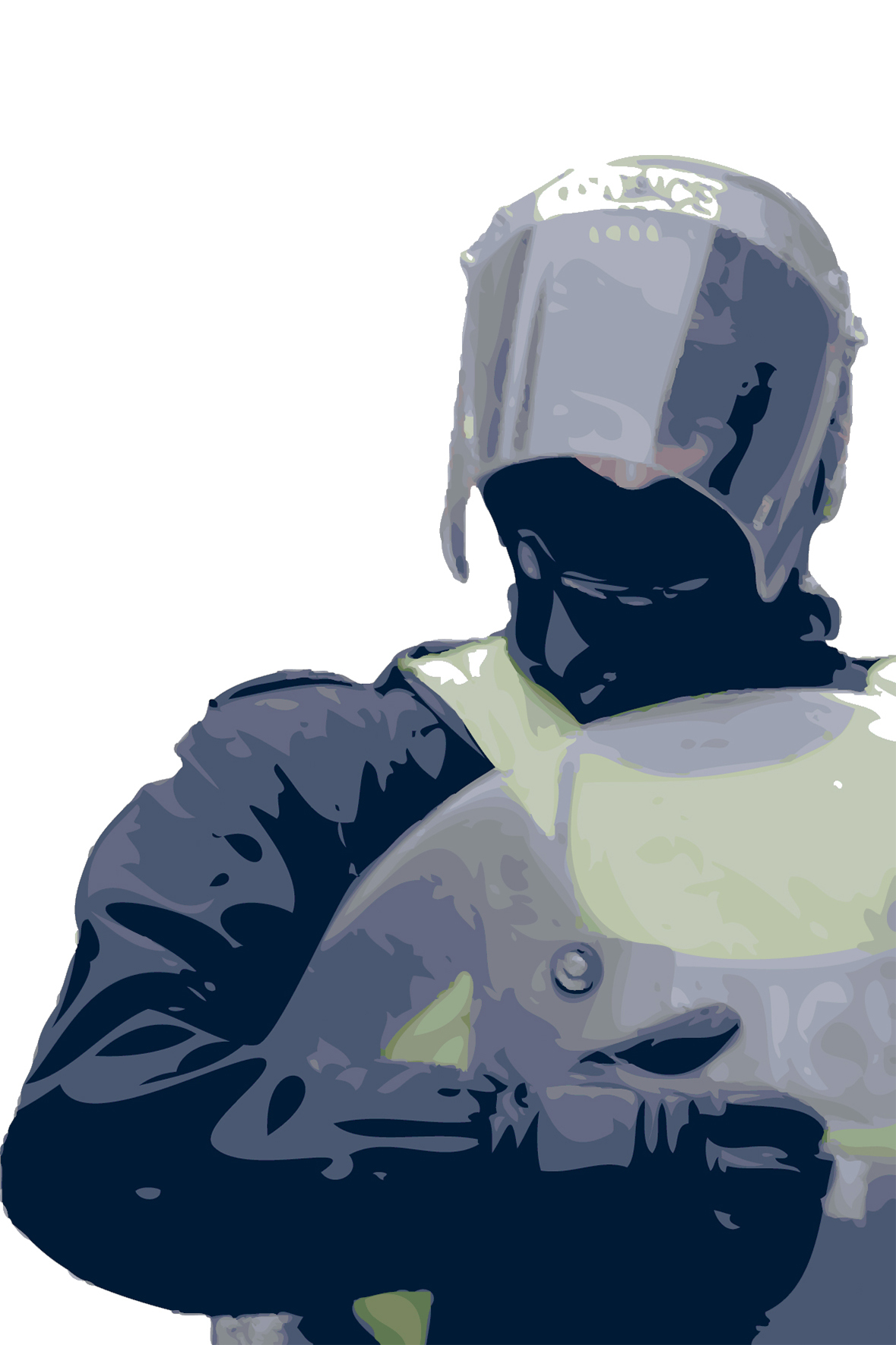