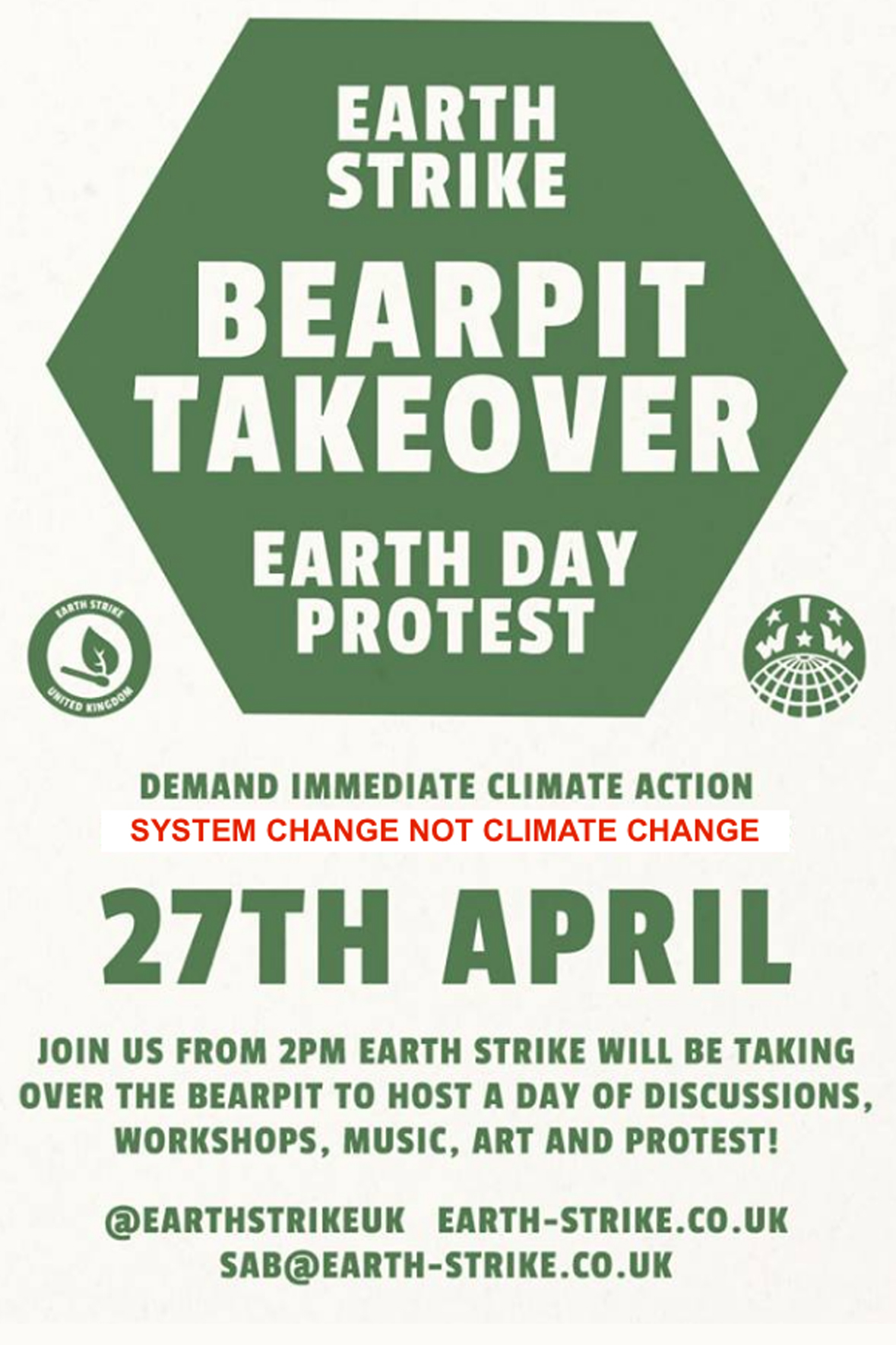 Earth Strike is another campaign putting environmental action to the front throughout 2019 and tomorrow they’ll be bringing it down in Bristol’s Bearpit.

In the works since November 2018, they called out for an international general strike on the 27th of September with three days of action before hand. Tomorrow is the “Halfway Earth Day Protest” and Bristol shall be coming out in force for “DEARPIT TAKEOVER” which is beingco-ordinated by the local branch of Earth Strike UK and the IWW’s Environmental Unionism Causcus and has a particular focus on spreading it’s wings and developing closer ties with other unions and organiser networks. They are rocking up with free music, food, workshops and a climate protest ofcourse! Which knowing Bristol should be lit!

Their case for a strike is pretty clear,
“The Anthropocene is forcing life on Earth towards extinction. Our planet and our future is under attack. Governments have failed to curb the exploitation and pollution of our climate by a handful of corporations. It’s time to take the power back and shut the power off! We don’t want new pipelines and airports and fracking sites. We want sustainable energy, clean water, decent housing and respect for all people.”

The organisers are actively looking for folk to come and help set things up so if you’ve got the time and the will get on it, maybe shoot them a message on their Facebook Page.
This being held at the Bearpit is pretty rad too. If you hadn’t heard it basically goes like this; The council pretty much hands responsibility for the Bearpit over to an Arts and Community network called “The People’s Republic of Stokes Croft” who quite happily made great use of the space for ages. Then one day the word come down that the council had decided to shift them on and were about to get their dogs to come and move people out and wreck the community that had been built. Keys were handed over, resistance prepared and a tidy bunch of renegades has been squatting the place since.

The logical thing here for any decent city council would be to celebrate this hub of political freedom, arts and community. Instead of threatening it, Bristol council should be working with the community to keep Bristol the lively, dynamic, colourful city that it’s so well known to be, always they are crook mother fuckers and so people have to act.

So yeah, great location, great networks, great cause and some fucking kick ass events planned for the afternoon. Sad to hear that the London detachment had to cancel their event but expect Bristol to rock it!

Here’s a timeline for the day (which may be subject to change):
13.00 Set up – all & any helpers are welcome!
14:00 Opening talk “What is Earth Strike”
14:10 Talk on ‘Climate Crisis and the science of extinction’ by Extinction Rebellion
14:20 Talk by Youth Strike
14:25 Talk by Rent Strike
14:30 Workshop by Animal Justice Emergency
15:00 Workshop on Social Ecology by Bristol Social Ecology Movement
15:30 Talk by Bristol Anarchist Federation “Capitalism and ecology”
15:40 Strike Announcement by IWW Secretary Russ Spring
15:50 Bearpit Takeover Direct Action Briefing Earth Strike
16:00 TAKEOVER ACTION (XR Samba Band will lead us out onto the streets to block roads around the Bearpit)
16:30 Music by ‘The Acronyms’
17:30 Music by ‘Invincible PIgs’
18:30 Music by ‘Perverts’